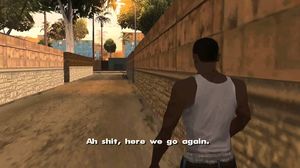 Though the video game was created in 2004, the clip has only recently begun to gain traction. When YouTuber ZMOONCHILD posted the clip four years ago, it garnered over 147,000 views. Now, it’s a wildly popular exploitable used in many contexts.

The “Ah Shit, Here We Go Again” scene has been in the opening scene of the “Grand Theft Auto: San Andreas” video game for over a decade.

The line is delivered by Carl Johnson, the game’s protagonist. After being harassed and threatened by deceitful police officers, Johnson is thrust into an equally as distressing scenario. When Johnson finds himself in a crime-ridden neighborhood, the only words he can muster are “ah shit, here we go again.” From there, the meme was born.

Clever individuals have used the scene to describe a Buddhist who’s died and been rebirthed. 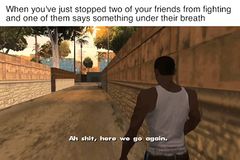 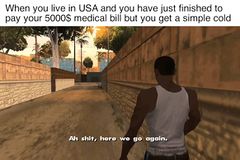