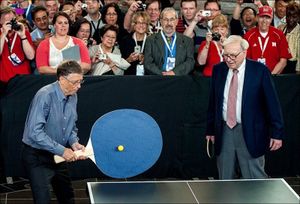 Bill Gates, the founder of Microsoft, is responsible for the rising of another viral sensation as well: the Bill Gates' Giant Ping Pong Paddle. Bill Gates and his comically large ping pong paddle have taken the media by storm as an ill-matched yet wildly hilarious duo.

The Bill Gates Giant Ping Pong Paddle meme came into existence on May 6, 2012. While attending the Berkshire Hathaway shareholders meeting, Gates made fast friends with Warren Buffet. Buffet, the CEO of Berkshire Hathaway, invited Gates to partake in a game of table tennis following the meeting.

Gates’ formidable opponent, Ariel Hsin, is an Olympian of notable prestige. This made the large paddle all the more hilarious. After a few rounds of table tennis, Buffet unveiled the massive paddle. Gates, being the good sport he is, accepted the oversized ping pong paddle with honor. Hsin, Buffet, and Gates engaged in more rounds, and the giant paddle proved to work in Gates’ favor.

The Bill Gates Ping Pong Paddle meme is now used to represent a situation in which someone is overcompensating, doing something wholly unnecessary, or using a more powerful tool than needed. For example, using a calculator to perform simple math. 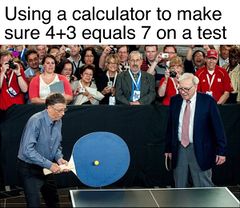 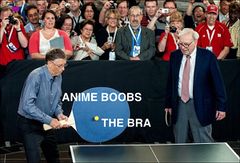 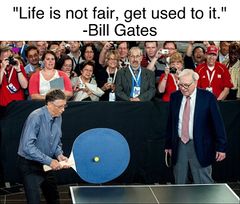 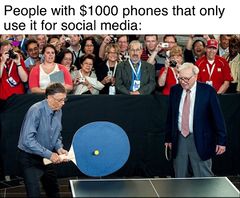