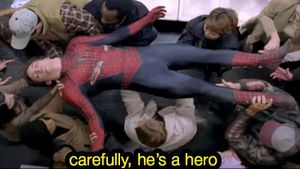 “Carefully He's a Hero” is a meme that features a screenshot from 2004's Spider-Man 2 and the edited-in subtitle "carefully, he's a hero." Internet denizens will often use it in a fashion that pays tribute to an absurd or funny action that someone has performed.

Spider-Man 2 was released in the US on June 30th, 2004. The scene that the meme specifically references shows Spider-Man, who is being played by Toby MacGuire, passed out after stopping a runaway train filled with innocent people. The people carry the passed-out Spider-Man over their heads as one of them emphasizes handling their hero carefully.

The clip featuring this scene was uploaded to YouTube in the December of 2016 and has accrued more than 40 million views over the past two years; The specific image used can be seen at the two minutes and 35 seconds mark of the clip.

Months later in the September of 2017, a Reddit user using the moniker furruti29 posted a screenshot of the scene and added the subtitle "carefully, he's a hero" along with a caption about a kid being expelled for sharing an attractive teacher's nude photos. The specific image can be seen here. The post exploded in popularity and received 21 thousand up-votes on Reddit.

This meme is focused on praising crazy or hilarious actions in a joking sense. One example would be a caption stating "My teammate clutched the final round in Counter-Strike with 1 HP and a Glock" with the image and subtitle being featured below. It can also be used to pay homage to a popular dead celebrity's life, the shutdown of a popular website and more. Lastly, it can be used to show respect for an action that others want to perform. 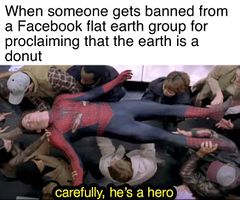 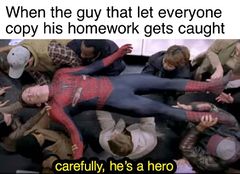 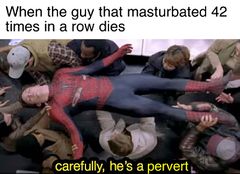