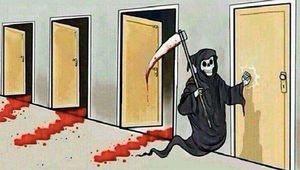 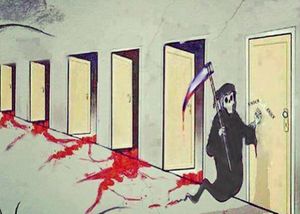 The meme “Death Knocking On Doors” is an image of the Grim Reaper knocking on a door in a hallway full of doors. Behind the Grim Reaper are a series of doors that are already opened with a pool of blood spilling out of each room.

The blood indicates that the Grim Reaper has already visited that room and the door he is currently knocking on will face the same fate. Images or text are often placed on or around the doors in a theme. The Grim Reaper himself is also often manipulated in some way to fit the theme.

The first known version of this meme was posted on the 16th of August, 2013. In this version, The Grim Reapers robes looked like the American flag and above the doors in order were written them names of the following countries: Pakistan, Iraq, Libya, Egypt, and Syria.

One more name is above the door in the far distance but is unreadable. The symbolism in this version is about how America has a history of causing civil unrest in many middle eastern countries, and is coming for Egypt next.

The meaning behind this meme is to show a pattern of destruction by a specific entity. It's making a comment about the next likely candidate that will be next in the path of destruction based on the current pattern.

The destruction is usually financially or culturally perceived rather than physical, like film or video game companies ruining their franchises.