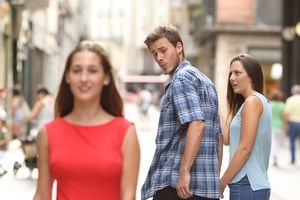 If you visit websites like Reddit, Imgur, or even Facebook with any regularity, you've no doubt seen the Distracted Boyfriend meme. Individuals remake and reuse the image almost daily, so countless variations exist.

The base of the Distracted Boyfriend meme is a stock photo of a man looking at the butt of a woman walking away from him, while his girlfriend looks at him disapprovingly. People label the individuals to create different interpretations of the image.

The original photograph was shot by photographer Antonio Guillem. He posted the image as a stock photo for sale, describing it as, "Disloyal man with his girlfriend looking at another girl."

The first known labeled version of the picture popped up on a Turkish Facebook group devoted to prog music at the end of January 2017. This iteration labeled the man as Phil Collins, the woman as pop music, and the girlfriend as prog music.

This didn't make the image viral though. That happened in February of the same year, when Instagram User @_dekhbai_ posted the picture captioned as, "Tag That Friend Who Falls in Love Every Month." The post got more than 28,000 likes in seven months.

The image continued spreading, and on August 19, 2017, Twitter user @n1m161 posted the photo with new labels. This time the man was identified as "The Youth," the woman as "Socialism," and the disgusted girlfriend as "Capitalism."

Then on August 21, Redditor danikger posted a new version, with the man labeled as "me," the woman as "solar eclipse," and the girlfriend as "scientific evidence supporting the dangers of staring at the sun." From here the image spread in a flash, with people changing the labels to suit all kinds of meanings.

The meaning of the meme changes with the labels, but is almost always interpreted as a person or group admiring something new (and often detrimental), while something familiar and reliable looks at them with disgust. Meme-makers can use this formula to change the meaning to show transitions in almost any situation. 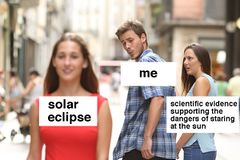 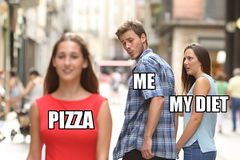 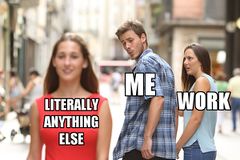