The meme of “Eminem Holding a Rocket Launcher” is quickly taking the internet by storm. This imagery depicts screenshots for a music video that Eminem shot with Juice Wrld called "Godzilla."

The two images have sparked a tale of labeling memes that have shed humor on the two images from a global, social media craze.

The origination of the video reaching a popular YouTube account was carried on March 9th, 2020. The video was an album shoot off of Mather's latest discography, Music to be Murdered by.

The song "Godzilla," featuring Juice Wrld, was the 7th track released on the album. The music video depicts a portion of the song where Eminem is confronted by a masked man. The masked man points a pistol at the temple of Eminem. Facing this danger, Eminem responds by hoisting a large rocket launcher and pointing it in the direction of the masked man.

After being posted on YouTube for the past 8 days, the music video has already reached over 56 million views. The lyrics that accompany the image are as follows: "you just pulled a pistol on the guy with a missile launcher."

The meaning behind the memes has been spread across many social media outlets. The back and forth commentary that accompany each image have trailed to funny upbringings of family history disputes, gaming humor, and some of the real-life disputes that have crossed Eminem's pathway throughout his career. 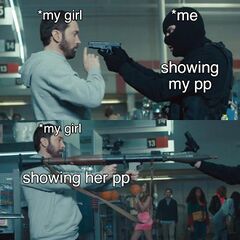 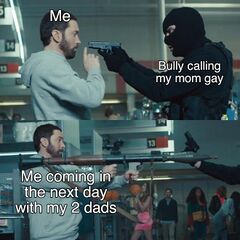 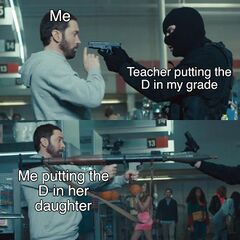 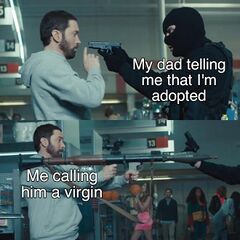