I, Too, Am Extraordinarily Humble 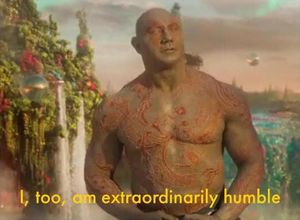 “I, Too, Am Extraordinarily Humble” is a meme quote from the movie Guardians of the Galaxy. The line is uttered by the character Drax as a joke. This is humorous as the character is clearly not humble throughout the entirety of the movie.

Guardians of the Galaxy was released in 2017. In the movie, the character Drax acts proudly and is generally full of himself. The full line uttered by the character is "Humility, I like it. I, too, am extraordinarily humble."

The quote was turned into a meme in August of 2018. The first instance of this quote being used as a joke was made by Reddit user Chapthecollector when he or she posted a screencap of the scene to a subreddit about humble bragging. Since then screencaps of the scene have been used in a variety of different ways across Reddit and other websites.

In this time the format was generally used to reference Reddit features as well as expensive electronic products. Otherwise, the format was also used for real-life humble-bragging situations. One common thing that was referenced in these edits were Apple AirPods. One of the bigger things that popularized the format was an edit in reference to the sorting by new on Reddit meme.

The format is used to convey that someone is attempting to boast while trying to seem as if they are humble. The format can be used to reference fictional works as well as real-life occurrences. 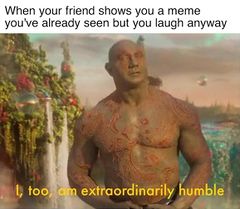 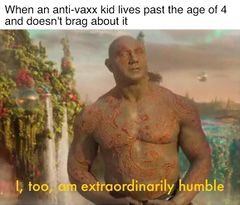 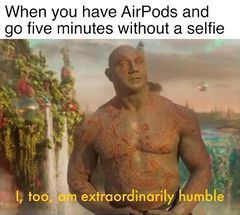 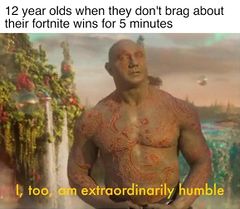