I Didn't Expect the Third Reich to Show Up 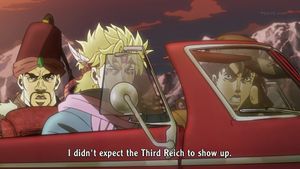 First seen in the anime hit series, “JoJo’s Bizarre Adventure,” “I Didn't Expect the Third Reich to Show Up” is a meme of international appeal. Joseph Joestar, the show’s main protagonist, utters the line after he and his comrades cross paths with Nazi Germany forces.

Interestingly enough, when rendered into its original language, the line translates to “German soldiers! What are they doing on the Swiss-Italian border?” English speakers kept the first rendition for comedic effect.

The exact episode this meme appeared in was titled “Von Stroheim’s Revenge.” It premiered in Japan on February 18, 2013. Set in war-torn Germany, the episode’s backdrop is that of 1939 Nazi Germany. Given the reign of the Third Reich in this era, Joseph’s one-liner makes more sense.

Though the clip didn’t garner much attention at first, heroicvenom, a Funnyjunk user, brought attention to it on January 16, 2014. After posting it as a response to another user on the platform, the hilarity behind the comment became more evident. In 2018, a Tumblr user gained over 20,000 hits after using the clip as an image reaction.

The I Didn’t Expect the Third Reich to Show Up meme is most prominently used in response to hot-headed individuals who lash out for seemingly no reason. In essence, it’s used to underscore an overdramatic and unexpected comment or action. Many have used it in response to PETA remarks or matters regarding feminism. 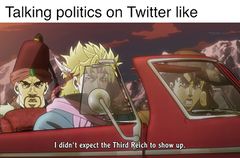 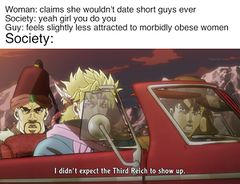 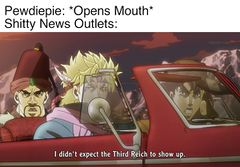 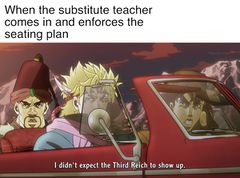