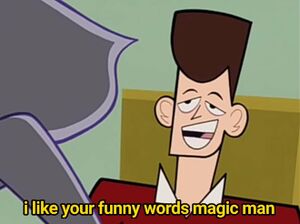 This particular meme is taken from a scene in the 2002 animated program "Clone High." Said scene involved the teenage clone of John F. Kennedy reacting to a sales pitch for raisins given by someone known as "The Pusher." The clip began to go memetic in September of 2020, being used as both a reaction and an image macro.

The Clone High episode "Raisin the Stakes" debuted on January 12th, 2003. One scene has Larry Hardcore aka The Pusher willing to sell raisins to JFK, when raisins have been smoked as a drug. After hearing Larry's pitch, JFK utters the memetic line of dialogue.

The catchphrase did not become memetic until September 9th, 2020, when it joined many other references and memes about Clone High, especially ones involving JFK. Twitter's @collymmit used the clip in response to how non-British people tend to react to hearing UK slang. The tweet garnered over 53k views, 1000 retweets and more than 3,500 likes in one month.

This meme can be used, in either video or macro form, to indicate being clueless after hearing an in-depth explanation or a string of proper nouns in a work of fiction. Examples of where this might be an apt response for include the following. 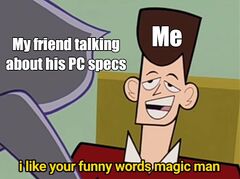 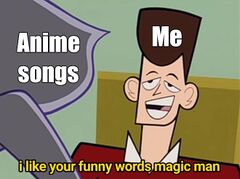 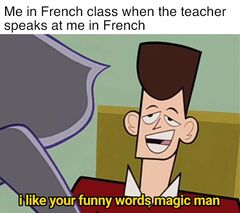 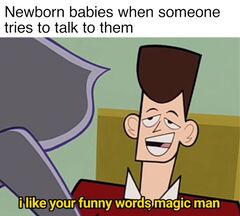