I Serve the Soviet Union 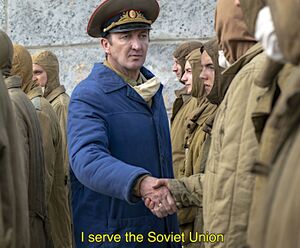 “I Serve the Soviet Union” is an image macro hailing from the popular HBO series “Chernobyl.”

A group of soldiers says the notable line to a Soviet general in response to his praise. The quote has connotations of agreeance, submission and servitude that lend themselves well to an image macro meme format.

“Chernobyl” premiered on HBO on May 6, 2019. The miniseries was an easy summer hit. It follows the events that transpired after the RBMK nuclear reactor of the same name exploded on April 26, 1986.

The meme originates from the fourth episode of the miniseries that premiered on May 27, 2019. Soviet General Nikolai Tarakanov praises a group of workers for their top-notch cleaning. They respond simply with, “I serve the Soviet Union.”

On May 29, 2019, actor Ralph Ineson tweeted a screenshot of the scene. The screenshot made a perfect meme template, and soon enough, multiple iterations of the meme were circulating Twitter and Reddit. By July 24, a version of the meme made its way to the r/dankmemes homepage, solidifying it forever in meme history.

Internet comedians and jokesters use “I Serve the Soviet Union” for praise and agreeance in a variety of meme-worthy ways.

The meme is always positive. Generally, the image macro is introduced with an agreeable event or favor to the user. It is then followed by the Soviet catchphrase. 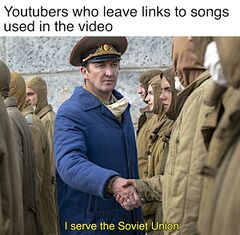 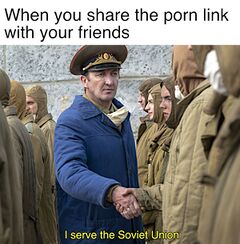 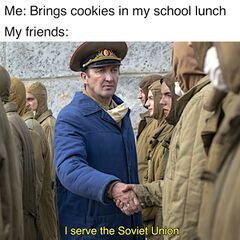 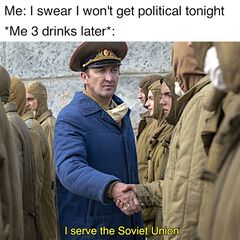