I Wish I Was At Home 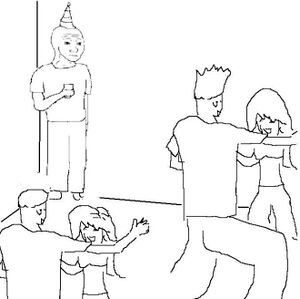 People who have social anxieties are prone to inner dialogues they hope cannot be discerned by others, and this is a theme widely explored in online memetics.

Feeling uncomfortable is a feeling that is difficult to hide, particularly when feeling itself makes you even more uncomfortable and unwilling to talk about it, but there are always memes to create and share about this situation, which is at the heart of “I Wish I Was At Home,” an image macro that is more recently known as "They Don't Know I'm."

The first image macro featuring "I Wish I Was at Home" was posted to Sad and Useless, an early online forum for self-deprecating memes, in late 2009.

That post featured a crude drawing of a "wallflower" man at a house party where people are dancing, letting loose, and having a good time, but he was not feeling it; instead, he stood by a corner of the living room nursing a drink and musing to himself how he wished to be home playing video games. Over the years, the image macro was turned into a YouTube video and other memetic variations.

In November 2020, the image macro got an upgrade when posted to Twitter; this time, the inner dialogue was changed to "They Don't Know I'm," which suggests that if other people knew what the main character is capable of, they would be giving him or her more attention. This latest version of the meme proved to be very popular on Reddit and Instagram, particularly when centered around video gaming skills.

It is not socially acceptable to make fun of socially awkward behavior; an exception would be, for example, a shy woman who makes fun of her social anxiety as self-help therapy.

On the internet, however, making fun of others is like mass therapy. If humorous self-awareness is your thing, this image macro will make you and others smile. 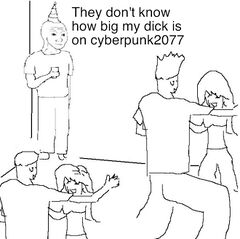 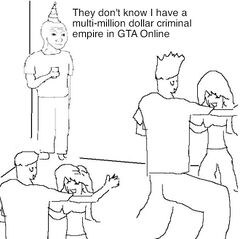 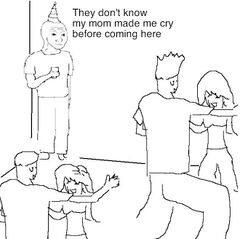 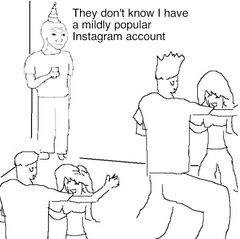