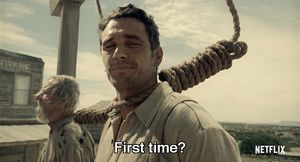 This meme originated from the film The Ballad of Buster Scruggs.

It stems from an unnamed character, who is played by James Franco. Franco's character is standing on the gallows awaiting his execution. Franco asks a fellow prisoner, a crying man also on the gallows, if this is his first time being (being executed). A still of the scene has been posted to the Internet in various image macros. These macros hint at a person’s inexperience in everyday situations.

The scene came from a YouTube upload for the western film on September 12th, 2018. It can be seen at timestamp 1:40. Twitter user @Ayub_dz posted a still of the trailer with the caption “When you’re hiding from a school shooter and the foreign exchange student starts crying.” The initial reaction to the tweet was positive, with 37,000 retweets and 131,000 likes on Twitter within five days. The post also made the rounds on Imgur and Reddit. The reception on both sites was also positive. On Imgur, the post received 158,000 views with 5,800 points. On Reddit, the submission received 58,000 upvotes with an 87% positive rating. Variations of this submission were posted in the /r/dankmemes subreddit.

The meaning of this meme is to imply that a person is inexperienced in a certain situation. The poster assumes the role of the James Franco character, who has been through an experience before. The person being addressed is the man who is crying on the gallows. This principle can apply to daily events, as well as specific historical scenarios. Here are some variations on the meme: 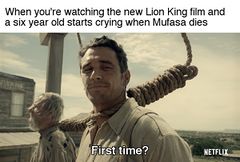 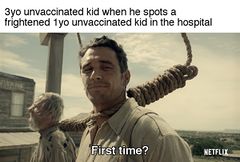 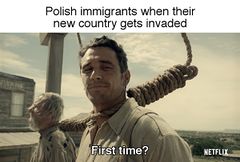 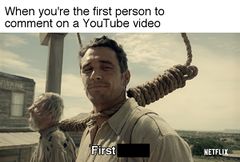