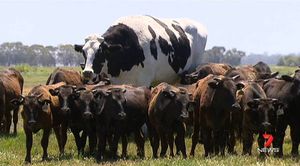 “Knickers The Steer” or “Knickers The Cow” is a meme that refers to photos of a cow that is one of the world's tallest steers at over 6 feet tall. The cow also weighs over 3,000 pounds, making it one of the heaviest steers in the world as well.

The origin of this meme began on October 29th, 2018 when an Australian new source posted an article about the perseverance of Knickers. Along with photos, the cow that dwarfed many humans in comparison was instantly shared upon being posted, becoming a favorite of many people in various internet communities.

A video of Knickers was later spread on November 27th by the 7 News Central Queensland TV station on Twitter. This video was retweeted more than 1,700 in just 24 hours, an incredibly fast rate for a tweet from a news station.

The reactions to Knickers continued to be positive, with many people referring to the cow as "a unit" and making jokes about the size. The jokes focused particularly on the comparison of the cow's size to an NBA player, referencing the original ABC description of the photo from October 29th. Examples of memes include people saying "I CANNOT (literally) AND WILL NOT (mentally) GET OVER THE MASSIVE AUSTRALIAN COW CALLED KNICKERS", painting the whole circumstance as absurdly wonderful.

The meaning of people's reactions to Knickers is that their fascination with the cow's enormous size is a result of their admiration for the cow. It is a funny story because of just how large the cow is, but also endearing because of how the cow escaped slaughter because of its size. It's almost like natural selection, allowing the cow to be able to persevere because of an anomaly in the system, something that is both inspiring and hilarious.

Overall, though, the purpose of Knickers The Cow as a meme is a positive thing, with people showing their support for the cow and the farmers that own him. 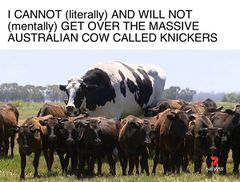