Me and the Boys

Me and the Boys can be used in standalone text format or used as a caption for an image.

In November of that year, user calogant posted an image of several mismatched characters sitting in church pews with the caption “Me and the boys at bible study.”

The meme really started gaining traction in 2019, though, with several posts in the format appearing on /r/memes and /r/me_irl. These posts quickly got thousands of upvotes, and the format subsequently spread to other websites.

In the spring of 2019, a variation of the meme featuring a strange cast of 60’s Spiderman villains became popular. This variation also came from Reddit.

The meaning of “Me and the Boys” is probably somewhat similar to “Squad.” It’s meant to poke fun either at a mismatched group of people, and/or an absurd situation that those people find themselves in. 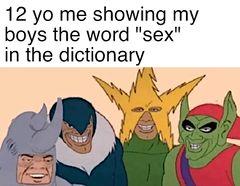 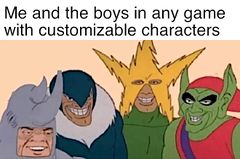 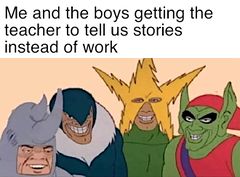 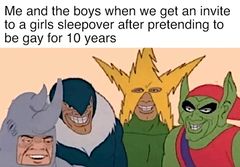