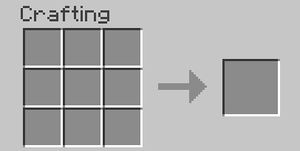 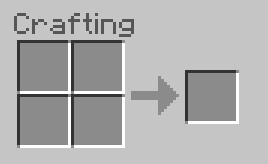 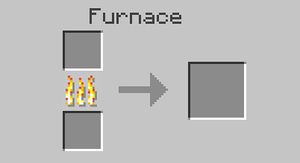 The “Minecraft Crafting Recipes” is a meme that utilizes Minecraft's crafting system to make jokes about various Minecraft and non-Minecraft related things. This achieved widespread popularity starting in February of 2019.

In the game Minecraft, players can craft a variety of different helpful things. Players can also equip armor and smelt objects using a furnace. Crafting can either be done in a 3x3 grid or a 2x2 grid, depending on whether or not the player is using a crafting table.

Some of the first edits of this system appeared in 2012, where several individuals make edits referencing real-life phones. Among the first of these edits were edits made that reference the Nokia 3310's durability. Another edit made around this time period is an edit referencing the supposed fragility of iPhones.

In March of 2017, Reddit user Art2718 posted an edit of the crafting system referencing drug smuggling to a subreddit. A few more edits were made in this time period that mostly referenced drug smuggling as well.

In February of 2019, the edits started becoming more frequent. The smelting functionality was added to the format. From that point forward, the format became significantly more popular with edits referencing anything from cigarette smoking to Star Wars.

The meme is typically used to convey an exaggerated sense of what a real-life object's crafting recipe would be, or what something is ultimately made of. It may also be used to convey that Minecraft items, such as sugar, have alternative meanings. 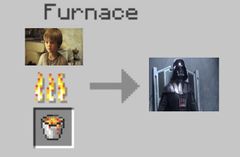