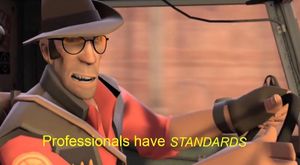 Since its introduction in late 2018, it's become a popular reaction image on Reddit and further afield, and it's continued to find usage well into 2019. Additional text is typically added to the top of the image for comic effect.

Team Fortress 2 has long been a popular source subject for memers. The strong reputation of the game and the heavy crossover between gamers and the Reddit community has launched countless memes, and Professionals Have Standards is just the latest in that legacy.

The original introduction cinematic that featured the still was released on YouTube in January of 2009 and garnered over 14 million views. But it wouldn't be until October of 2018 that it would find usage as a meme.

Reddit poster mommaschunkymix altered the original post to reference ISIS and bestiality, earning over 1500 points for their efforts. The image quickly spread across Reddit, particularly on the dankmemes subreddit, and it's since become a regular standard in the Reddit community.

The “Professionals Have Standards” line is never altered, but the addition of text at the top of the image allows for a wealth of potential jokes.

While the original post was employed ironically (and that continues to be a popular approach to creating a new meme with the image), it's also often used to express sincere, if sometimes controversial, opinions. 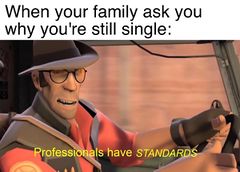 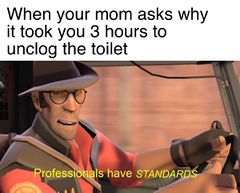 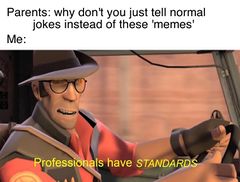 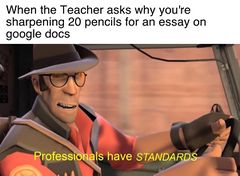