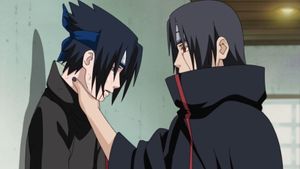 Known as “Sasuke Choke Edits” and various iterations of Sasuke being choked or strangled, is an image exploit taken from a screen capture of the anime "Naruto" Said image depicts bad-boy ninja Sasuke Uchiha being held up, by his brother Itachi, against a wall with Itachi's hands grasped around the boy's neck.

January 2019 saw a proliferation of this sort of imagery on Twitter, showcasing various characters being photoshopped in such a way that their arm flows into the position of Itachi's in the image.

As this viral image is derived from an anime, the image in question initially appeared in the 85th episode of the original Naruto series.

The scene showcases Itachi pushing Sasuke aside and taunting him for his weaness. The scene was later revisited in a redrawn sequence for Naruto: Shippuden; this later scene debuted on April 19, 2012 in an episode titled "Rift."

Over six years later, @kirikocult, a user on Twitter, took the image and placed it adjacent to a cat, giving the appearance that a cat is choking a weak child. The initial image gained nearly 10,000 retweets and nearly 20,000 likes in just 72 hours.

Two other Twitter uses, @glossjeons and @shotodorkis, gained a similar level of viral fame on January 14th, 2019, for their respective images. One shows Sasuke being handled by J-Hope, a South Korean rap musician; the other shows Sakura Haruno, another character from the Naruto franchise. These images gained 12,000 and 4,900 retweets in just 4 hours.

All of these photo edits and mashups depict one of the most powerful characters in the Naruto franchise during a scene where he was powerless, usually to deride Sasuke, who later becomes quite powerful, or to showcase someone else deemed without weaknesses. 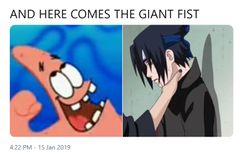 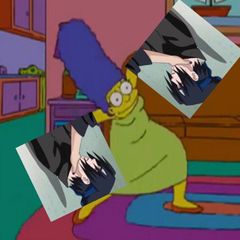