The Skyrim skill tree meme is one of the oldest memes that are still being used. It can be used to express someones skill (or the lack of it) in any given area of expertise. The meme has been modified and reused in many ways.

The "Elder Scrolls" games by Bethesda have been quite popular for a while now, with the fifth game of the series, "The Elder Scrolls V: Skyrim", winning multiple "Game of the year" awards. It is within the 20 most sold games of all time. As such, the game has been the origin of multiple memes, the best known of which is probably the Skyrim skill tree meme.

In the game, the player has a set of skills that can be leveled up to a level of 100 and start off on 15, in addition to a bonus that is given to particular skills depending on the player's choice of race.

On June 18th in the year 2017, the user u/Autistic_Spinning posted the very first variation of this meme, containing a screenshot of a YouTube video that was titled "Prison Escapee Convinces Cop He is Actually a Jogger", combined with the "Speech 100" version of the meme.

Starting with this, the meme was used all over reddit and other platforms, with variations like replacing the "100" with a "0" or the "Speech" with any other Skyrim skill or even unrelated things. The most notable versions apart from "Speech 100" include "Sneak 100", "Restoration 100", "Illusion 100" and "Block 100".

The meme is mostly used to emphasize someones skill in a particular area, but can also be modified to show the opposite. It can serve the purpose of explaining or repeating the joke of an image that would already be funny by itself. Sometimes, the meme is used in a sarcastic way, showing how skilled people believe they are, but aren't. 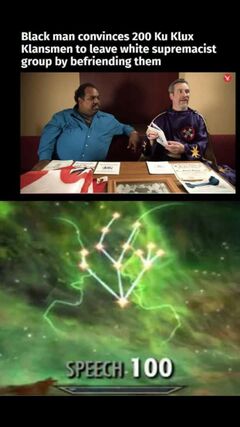 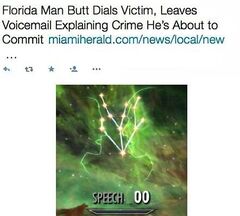 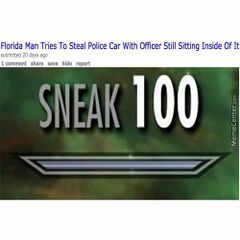 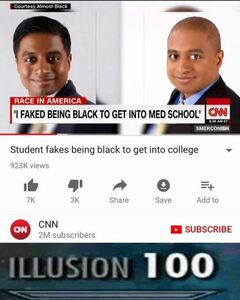