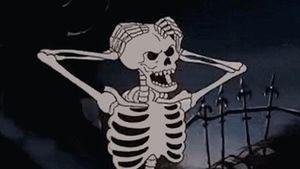 What Is the Spooky Skeleton Meme?

It's always a good time for a scare, but what does the outraged skeleton that keep popping up on Twitter, Reddit, and every forum across the known universe mean? Turns out, the skeleton is a visitor from the 80's. It's also one of the most versatile reaction images available.

The Spooky Skeleton meme is a reaction image, gif, or macro (captioned) image. It shows an animated skeleton reaching up, grabbing its own skull, ripping its skull from its neck, and hurling the skull towards the viewer. Still images usually feature the skeleton with its hands in the air or its hands on its head, and typically only gifs show the skull flying towards the "screen." Although all spooky skeleton images suggest frustration, different iterations have different implications, as discussed below.

The clip that birthed the meme comes from the 1987 animated movie Scooby-Doo Meets the Boo Brothers. In the opening credits, Scooby and Shaggy run away from a range of scary creatures, including a skeleton tossing its head. That skeleton appeared in 2014 as a reaction gif on a wiki board. Since then it has spread to every corner of the internet. Due to its literal "spooky" nature, it sees a resurgence online during the Halloween season every year.

All iterations of the spooky skeleton meme express frustration, but the still image - or gif - a user selects adds some nuance. When the skeleton appears with its hands above its shoulders, it looks like the classic pose most people adopt when they literally "throw their hands in the air." It suggests an irritated "What?!"

When the skeleton appears with its hands on its head, it suggests a greater, internalized level of frustration. This skeleton is consumed with impotent rage. The fully animated gif best represents full outrage. Used as a reaction gif, the spooky skeleton ultimately suggests the user is so frustrated and done with the situation that they are ready to tear off their own head and throw it at the offending post, argument, or issue. 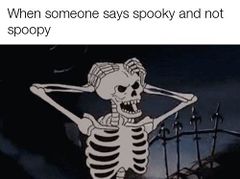 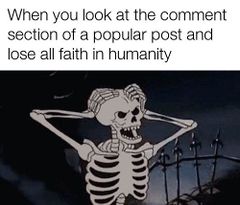 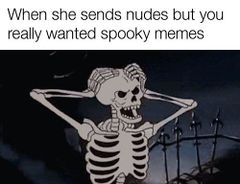