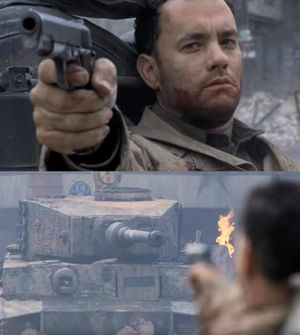 “Tom Hanks vs Tank” is a type of meme that relies on using two separate screenshots from the movie Saving Private Ryan (1998). It typically is used as an object labeling meme, with creators labeling Tom Hanks (the soldier), his gun, and then the tank in the second panel to represent some type of overpowered enemy. The purpose of this is to represent something that is impossible to overcome.

The movie Saving Private Ryan was a huge hit in the US, garnering 70 million dollars in the box offices. It is a movie set during World War II, specifically taking place during the Invasion of Normandy. The film was known for its graphic aesthetics and honest portrayal of war, something that was very unique for the time.

The first appearance of the tank scene from Saving Private Ryan in an online context was on April 20th, 2015, when an Imgur user under the name pugdogg55 posted a .gif of the scene in which Tom Hanks blew up a tank with his pistol. The post didn't gain much traction over the years, only receiving about 80 points and 560 views in 3.5 years.

This would change on November 14th, 2018, when a Reddit user under the name Funbobby15 changed the context of the scene. Instead of having the joke represent someone overcoming a seemingly impossible obstacle, the scene changed to presenting somebody who was facing something much more intimidating than them.

Though this missed the point of the original scene from the movie, after the Reddit user pilalla posted a version relating to No Nut November, the joke took off and became popular.

The meaning of the photos is typically to reference things that are out of one's control—by labeling the soldier as one thing, the gun as an action or effect, and the tank as an impossible obstacle, it can provide hilarious juxtapositions. 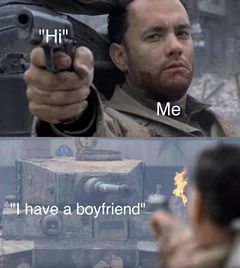 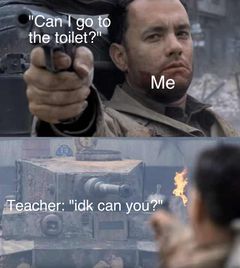 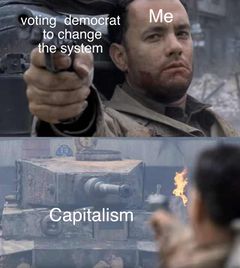 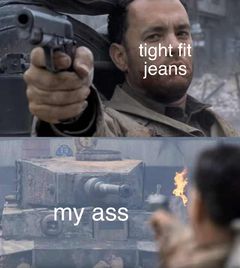