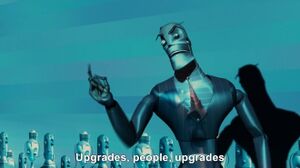 The “Upgrades, People, Upgrades” meme comes from a line spoken by Phineas T. Ratchet, an antagonist in the film "Robots." This particular meme is an image macro that has been used to allude to lifehacks and other ways that a person can improve themselves.

Robots debuted within the United States of America on March 11th, 2005. One notable scene has the character of Phineas giving an office presentation at a robotics company; said presentation involves putting most resources on the marketing of upgrades over spare components.

Come July 25, 2019, Redditor theepicguys posts a captioned still, taken from the specific scene, to /r/MemeTemplatesOfficial. This initial post garners 60 votes across the span of four months. The format stagnated until theepicguys posted a new take, based on the template, to r/memes on August 2 of the same year. This time, the new version garnered nearly 41,000 upvotes in four months. Lastly, this redditor posted the same template to r/MemeFormats and gained 190 upvotes.

In short, "Upgrades, People, Upgrades" is the perfect image set to use to approve of someone's willingness to improve a situation, rather than work around or through it. While the obvious usage would be commenting on any article regarding cybernetics or the Singularity, the macro is generally suitable for any sort of commentary on pursuing improvement. 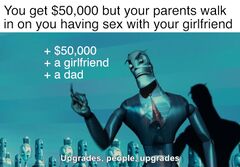 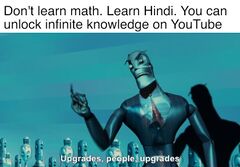 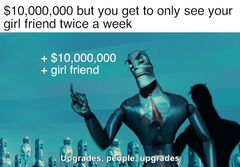 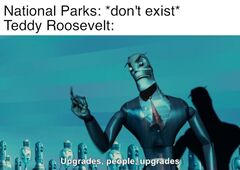