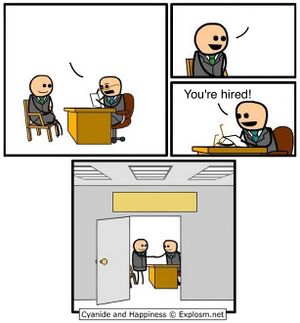 This particular meme “You're Hired” or “Welcome Aboard!” is an exploit comic taken from "Cyanide and Happiness." Rewrites often change the initial interview question, response and company name as a way of making jabs at various corporations, websites and organizations.

Ron DenBleyker published the source comic on December 22, 2009 and it involved mocking the normal questions asked when being interviewed for a job. the initial comic has the employer asking a Mr. Smith where he sees himself a decade from now. Mr. Smith responds with the simple two-word answer of "A mirror." The interviewer than utters the titular phrase of the meme and one final panel zooms out to show that the company name is "Smartasses Incorporated."

The first rewrite of this comic was performed by Michael C. in a rewrite contest hosted by Explosm.net, Cyanide and Happiness' webhost. Michael C.'s entry was showcased on February 25, 2012.

This is a very open-ended comic to exploit, leading to many permutations that all boil down to taking a crack at some group. Here is just one example.

Interviewer: Miss Lee, what is the sound of one hand clapping?
Miss Lee: The noise your face will make if you do not hire me for this position.
Interviewer: You're Hired!
Zoom out to reveal a sign reading "I Want It Now Inc. Asserting our dominance upon others since 1955." 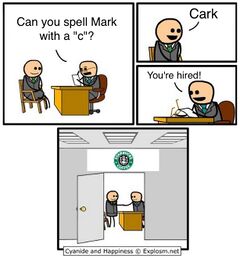 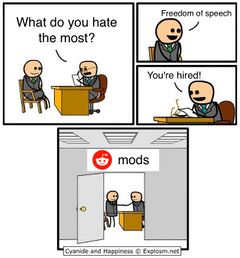 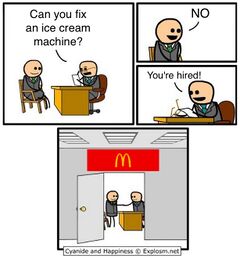