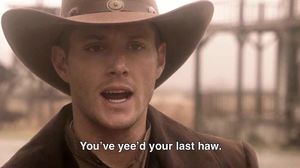 The slang expression “You've Yeed Your Last Haw” is an expansion of the exclamation "yee-haw" ("yippee-ki-yay"), which is generally associated with cowboys. The first version of the expression attached to the meme came from a tweet that went viral, and was part of the Sad Cowboy Emoji's development via memes.

Currently, the updated version of the expression has been combined with an image of Dean Winchester from Supernatural and circulates as an image macro.

During Autumn, 2017 the Sad Cowboy Emoji trend became connected with an interjection originally popularized by the Western genre of films—"yeehaw", "yee-haw" or "yippee-ki-yay".

The next form of the meme came nearly a year later, when @sadgirlkms posted "u have yeed ur last haw" to their Twitter on September 15th, 2018. The tweet went viral, getting more than 72.3k likes and over 27.5k retweets in five months.

The meme currently uses an image macro format that originally came from Twitter user @SavinTheBees. Their post used an updated version of the expression, paired with a still of Dean Winchester from Supernatural's "Frontierland" episode, and quickly became the most widely used format.

Generally the expression "you've yeed your last haw" and its accompanying macro are accompanied by text depictions of two groups. The first, which is usually an object, person, character, or concept, is implied to be on the hit list of the second, which tends to follow the same categories of the first.

The expression carries the connotations of a threat, with the implications conveyed being similar to something like "you've had your last hurray". 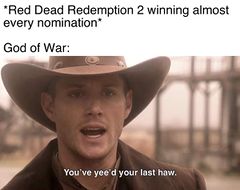 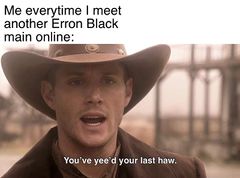 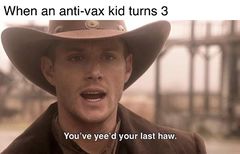 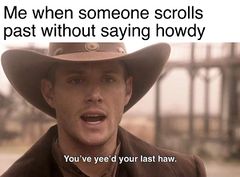