You Are Bad Guy 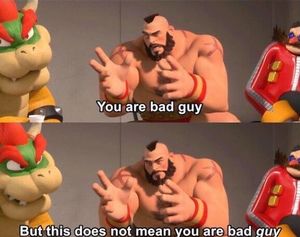 “You Are Bad Guy” is a meme phrase that originated in the 2012 movie Wreck-It Ralph. The full quote from the movie is "You are bad guy, but you are not bad guy." The line is said by the character Zangief. The quote is typically used to imply that someone in a criminal or otherwise considered bad role is not a bad person.

The meme started in July of 2016 when a Twitter user named Gamingbible uploaded the first two-panel version of the scene. The user used it in reference to friendly fire in a video game. In 2019, the format took off and other individuals started making their own edits of the two-panel scene.

Most edits made in this time period were referencing news headlines where a criminal did a good deed in the process. For example, one edit was made to reference a burglar that called the cops on the individual who owned the house he was burglarizing because he had found child pornography in it.

The meme is typically used to convey that a criminal's actions are partly noble. Either by their crime being justifiable or by them doing something noble in the process of committing their crimes.

The format can also be used to convey that an individual's actions shouldn't be considered criminal or bad in general. The format can be used for real people as well as fictional characters. 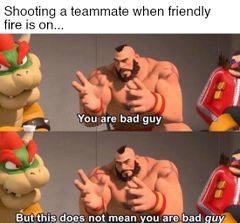 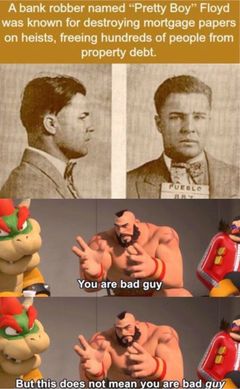