You Weren't Supposed to Do That 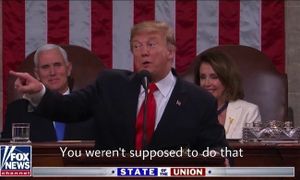 “You Weren't Supposed to Do That” is a simple image macro of President Trump addressing members of Congress with the aforementioned caption. The meme is starting to take off on social media, despite its relatively recent creation.

Taken from the February 5, 2019 State of the Union address, the "You Weren't Supposed to Do That" meme refers to a part of President Trump's speech wherein he addressed much of the US Congress's freshman class, largely made up of women, who seemed to cheer one of President Trump's talking points.

The State of the Union address was a contentious event in which partisanship divided members of Congress into either Trump supporters or people who sided with House Speaker Nancy Pelosi.

In his State of the Union speech, Trump expressed surprise that a number of Democratic congresswomen were seemingly praising his economic and social agenda, since being from the opposing party, they were "supposed" to stand against Trump's policies. In other words, Trump was impressed that his talking points received support from one of the most decidedly "anti-Trump" sections of the audience. (Many congresspeople were elected in response to "protest votes" against Trump's presidency, for example.)

The image macro is most commonly used on social media websites in response to positive reactions from the other side of an Internet debate. If a poster to a site such as Reddit or 9gag is making an argument for Net Neutrality, for example, they might use the meme to mock someone ostensibly opposed to such policy for accidentally agreeing with a view that counters their argument. 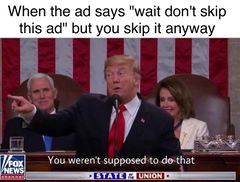 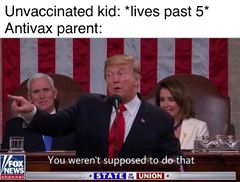 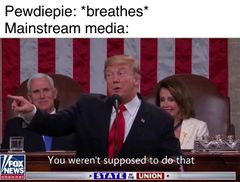 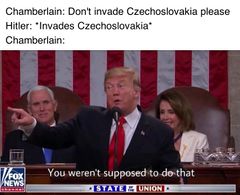