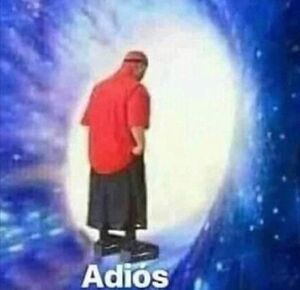 The “Adiós Wormhole” meme is a reaction image macro involving a photo edit. Said edit has a man in red and black clothing stepping through a wormhole in space.

The earliest known version of this image could be traced to Cubed.com on September 12, 2012. The image was credited to the Imaginary Foundation, a Swiss think tank that looks into experimental new ways of researching thought and imagination. The original version of the man in this meme features a black silhouette of man wearing a colored hat, bag and shoes and has this man stepping into the gaping maw of a white hole in space.

Come February 7, 2020, Tumblr user "crtter" uploads the image as a response to a "Pokémon Go" screenshot. This one post garners more than 128,000 notes in less than a single year.

The exact origin of the Adiós image remains nebulous. One notable tether of origin is that the more popular version of the man in red popped onto the internet less than a month after crtter's initial post. The first instance of this version was a March 6, 2020 post on the Facebook page "shitpostingconstickers."

This particular meme has a broad range of applications with the general of being presented with some means of leaving. The nature of what leaves can be anything from depression to a stomach's contents after enjoying Mexican food. 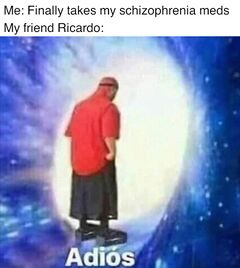 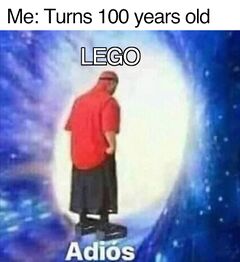 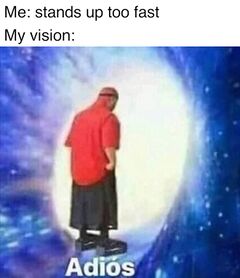 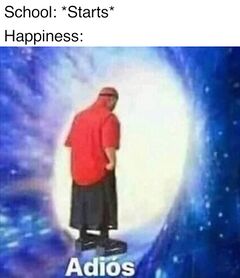