Are you challenging me? 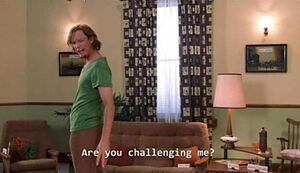 Live-action film versions of the Scooby Doo generate impressive revenue at the box office, but they have been generally crushed by film critics.

Despite being universally panned, there is a bright spot in Scooby Doo films that many critics have praised: Matthew Lillard's masterful performance as Shaggy Rogers, a highly gregarious slacker who shares a congenial love of junk food and exaggerated cowardice with his beloved Great Dane.

Shaggy is an ideal subject for memes, one of them being the "are you challenging me?" image macro.

It took about a decade before Matthew Lillard's Shaggy was used to make memes, and his appearances have been surprisingly scant in this regard.

Before being made into an image macro, Shaggy appeared in a Reddit discussion thread specifically centered on the character; it was a clip from the 2002 Scooby Doo film in which he questions his dog during a discussion about their favorite subject: being able to eat lots of tasty junk food.

The clip was uploaded in February 2019, but the image macro version did not appear until a few months later.

This is pretty literal meme, and its meaning goes along the lines of the legacy "challenge accepted" rage comic meme, but with greater irony.

An example would be students boasting with great sarcasm about scoring dismally low on an impossible math test, to which an adequate response would be to impress others with the lowest score of the entire class. 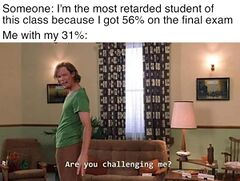 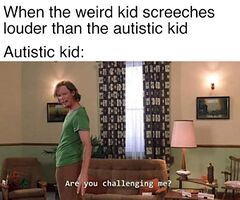 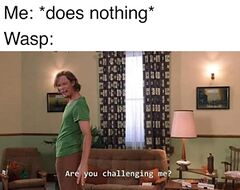 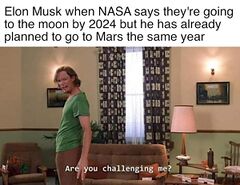