Bitch. How Dare You Still Live?

“Bitch. How Dare You Still Live?” is a meme that dates back to mid-2017 on 4chan's /tv/ message board. The first image macro, traditional form of the meme came about on April 20, 2018, when a Reddit user posted his take to the r/memes subreddit. This early version of the image macro only garnered 30 upvotes, essentially keeping the image macro unknown to the Internet.

The first big break for "Bitch, How Dare You Still Live?" came about on May 2, 2019, when Reddit user u/MeMeMachina052 managed to get more than 1,600 upvotes on the version that he uploaded. Its popularity really started to come about earlier this month, when users across the subreddit of r/dankmemes, as well as others related to less-nuanced image macros of "Bitch, How Dare You Still Live?" began to spread.

If you didn't already know, Africa has its own entertainment industry in which low-budget movies are pumped out at a high volume. They're usually shorter than movies that come out of modern-day Hollywood and are of a much, much lower quality than those hailing from Hollywood, Bollywood, and other respected sources of films.

This image macro uses a still from the 2010 Ugandan movie Who Killed Captain Alex? Sserunya Ernest, playing Richard, uses a handgun to threaten an antagonist who holds two females hostage.

Most all uses of "Bitch, How Dare You Still Live?" are intended to be humorous. They refer to things that either are thought by the minority that they should be dead already, in which the macro's text takes a sarcastic tone of voice. They also refer to things that the public believe should be out of commission by now in a humorous manner. 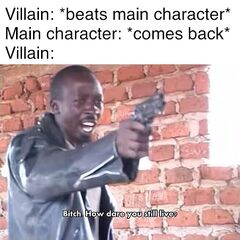 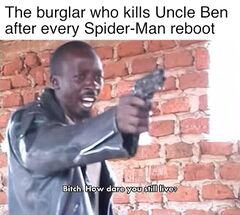 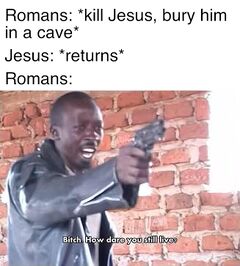