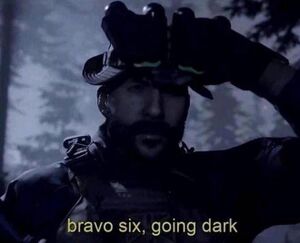 The “Bravo Six, Going Dark” meme was brought to us by “Call Of Duty: Modern Warfare,” a wildly popular video game.

The quote was said by Captain Price, one of the game’s most esteemed characters. Before the video game was released, the creators put out a trailer.

Within the trailer, Price is seen donning a pair of night goggles and uttering the famous one-liner. Immediately after the trailer hit smartphone screens, the clip went viral.

Just one day later, Redditors had their hands on the meme. Baduux, a member of the social media platform, posted the image and gained over 14,600 upvotes.

CharBAZard posted an edit of the photo as well, which also garnered a fair amount of attention. To date, Tarunrawat471 is credited with creating the most popular rendition of the meme, with their post receiving nearly 41,000 upvotes.

The Bravo Six, Going Dark photo is used as a response to inexplicable shutdowns.

For example, when the bathroom lights go off while you’re still on the toilet. The picture also serves as a way to express annoyance. For instance, when kids ask to play games on your phone. 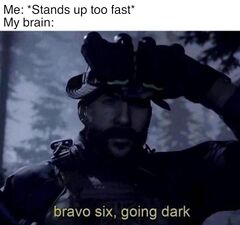 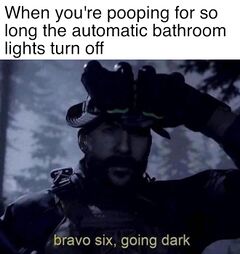 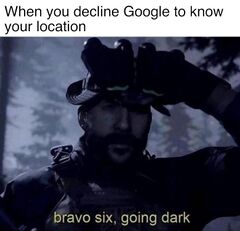 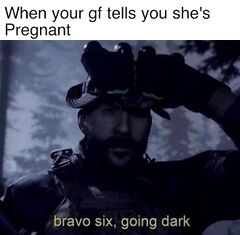