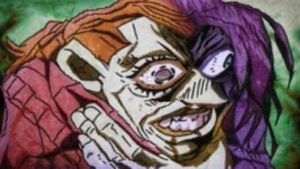 Japanese manga and anime series have always been easy fodder for meme makers, particularly when they feature strange plots, over the top characters, and dramatic images.

Jojo's Bizarre Adventure, a manga series that dates back to 1987 and eventually became an anime production and a media franchise, has all the elements that internet users need to create image macros, exploitable panels, reactions, animated GIFs, object labelers, and more.

This is a series that has inspired dozens of memes, and “Choking Doppio” is one that trended heavily in 2019.

Vinegar Doppio is one of the many extravagant characters in the Jojo fictional universe; he is the brother of Diavolo, the godfather of the Neapolitan Passione crime family, but he has a supernatural fraternal bond that allows him to serve as one of his sibling's multiple personalities.

In April 2019, a Jojo's anime episode featured a curiously animated scene whereby Doppio seems to be choking at the same time his brother's alter ego contemplates the aftermath of a violent situation. The artful way the scene is animated looks quite sinister, and a still image of Choking Doppio was posted on Reddit shortly after the episode aired.

The image proved to be more popular once it was distorted with Photoshop because it looks like an exaggerated reaction to something unpleasant.

As far as image reaction memes go, this one is pretty literal. Let's say you taste a Caribbean bonnet pepper sauce for the first time; in this case, you will likely look like Choking Doppio.

Another example would be if someone you have a secret crush on unexpectedly reciprocates. 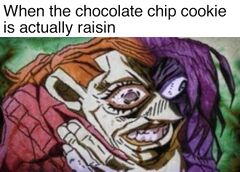 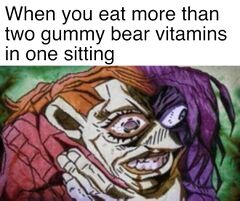 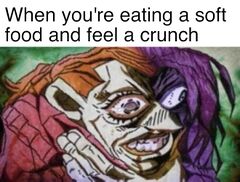 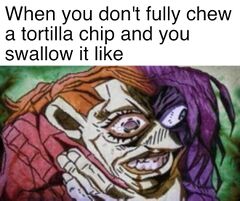