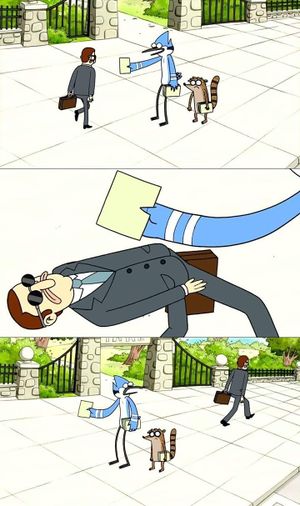 “Dodging the Flyer” is a three-panel sequence taken from the Regular Show on Cartoon Network.

In the depicted scene, the characters Mordecai and Rigby unsuccessfully attempt to hand a flyer to a passing stranger. It is used to humorously depict an avoidance of a certain object, and quickly became a popular meme to edit.

The original episode “Grave Sights” first aired on May 16th of 2011. The actual scene from the show’s episode shows Mordecai and Rigby try to hand a flyer depicting a movie being shown at a local park to a stranger passing by. Instead of receiving the flyer, the stranger exaggeratedly leans back and completely avoids touching it.

The original meme was done in Spanish and made its debut on Facebook through the group Plantillas Para Memes. The Facebook group used the screenshot to create three posted panels, one being blank, and two additional Spanish versions. One was edited humorously to make fun of disregarding their followers’ input, and the other referenced avoiding accepting a Jehovah’s Witness’ bible.

It quickly became popular with Spanish-speakers which initially led to several Spanish versions being made.

The first English version of the meme surfaced towards the end of October 2018. It had Netflix represented as Mordecai, a “you’re being cancelled” message on the flyer, and the Netflix original show "Daredevil" as the stranger.

The original (Spanish) version had Facebook followers represented by Mordecai’s character, and the group Plantillas Para Memes as the stranger. The flyer being handed out contains the Spanish word for “input” and the dodge represents the exaggerated disregard for the input followers may try to impose.

Following the original outline, the first English version used the same comedic punchline to illustrate the Netflix show "Daredevil" ignoring the cancellation notice, referencing the news of the show being canceled after completing three seasons.

Its humor led to the screenshot being edited several times, all representing the avoidance or lack of care for a certain object or ideal. An object making it an easy favorite amongst users and meme-lovers alike. 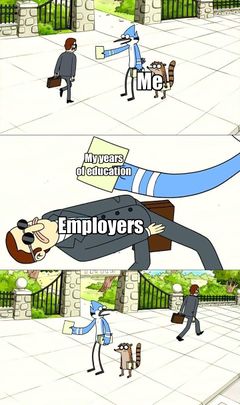 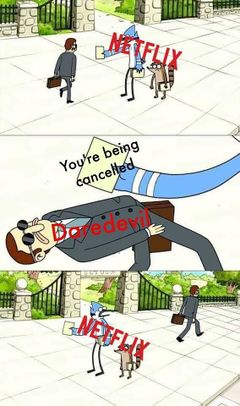 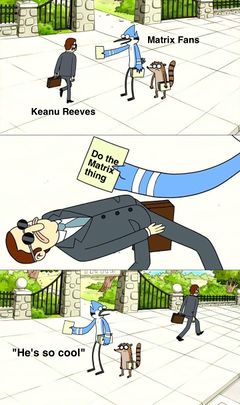 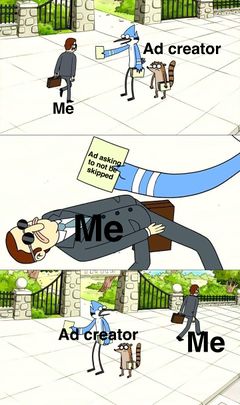