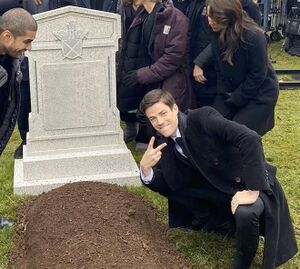 The “Grant Gustin Next To Oliver Queen's Grave” meme is an image macro based on a picture of Grant Gustin, an actor from the CW show The Flash, flashing the peace sign while kneeling over Oliver Queen's grave.

Oliver Queen is the main character from the CW show Arrow. Both shows take place in the same universe. It was spread mostly around Twitter, Reddit, and Facebook.

The origin of the picture is unknown. The earliest appearance is on January 29, 2020, by Twitter user @AwesomEmergency, and its reposting by Reddit user psp8199. Redditor buff730 posted the image to Reddit with the caption: When the guy who stole your girl dies, where it received over 360 comments and over 39,000 points.

Also on Reddit, user ItsP3anutButt3r posted an image with the Internet Explorer logo on the grave and the Google Chrome logo on Grant's face, which got over 29,000 points and 130 comments. George Hampshire from Facebook posted one with Loki's name over both the tombstone and Grant's body, which received 2,800 reactions in under 24 hours.

The meme is about someone celebrating the death of a person they don't like. It can also be about the impending end of something like the upcoming death of a character, or a business failing and a competitor celebrating.

Some instances are of someone next to their own grave as well. It can be with a caption above the picture or words over the headstone or Grant Gustin. Icons can also be used. 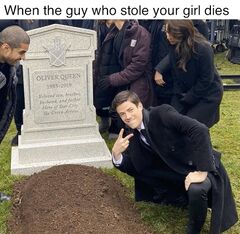 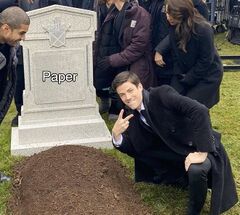 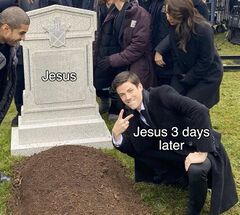 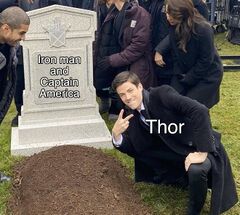