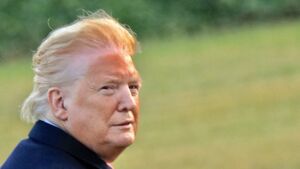 The meme known as either “Donald Trump's Tan Face Photo” or "Donald Trump's Orange Face Photo" is in reference to a photo taken by William Moon as Donald Trump was making his return to the White House from a recent rally he held in Charlotte, North Carolina.

The image quickly went viral, mocking just how much of a distinction in colors exists between Trump's face and the rest of his body. This one image lead to numerous photoshopped parodies.

February 7, 2020 was when the photograph of a walking Donald Trump was taken. Not long after, the @photowhitehouse Twitter account posted the image of Trump looking toward the camera with wind blowing his hair backward, revealing the startling contrast between the spray-tan of the man's face and the pallid coloration of his scalp.

The image has been used to craft all manner of memes calling out the insecure man's attempts to appear more youthful that he actually is. One particular examples of the sorts of meme this photo spawned include the following: