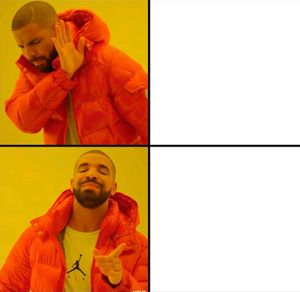 “Drakeposting” refers to a common meme of using two screen captures from Drake's "Hotline Bling" music video to denote preference of one thing over another. The top image would be of Drake turning his head away from an adjacent image or text with his hand extended as if to reject the image outright. The bottom image would then be Drake looking at another adjacent image or text with a look of satisfaction on his face as he points to it. The implication is that he (or the user posting the overall picture) prefers the bottom thing over the top thing.

The meme's origins begin in 2015 when Drake debuted the music video for his single "Hotline Bling" where, at one point, Drake performs a dance move that, when isolated, looks like he is looking away in disgust. This was screencapped and used in the video game sections 4chan forums starting mid 2015. The use of the two images spread across the forums such as the technology and music sections in January 2016 and moved into Sheeky Forums and Reddit. Other sections of the music video have also become memes in their own right, such as the moments Drake is dancing in a gray sweater.

Generally, the meme's style is that the top thing is objectively better than the bottom and yet the user still prefers the bottom thing over the top, usually implying bad tastes or even self-deprecating tendencies on the part of the user. This is not always the case though as some versions simply demonstrate a distaste for a "remade" property in comparison of an earlier version.

As is common in memes, the Drakeposting meme is also subject to photoshopping to transpose other faces onto Drake's so as to better push a punchline. Examples of this can include Ewan McGregor's version of Obi-Wan Kenobi (usually centering around his fixation on having "the higher ground") or Thanos (and his obsession with decreasing things by half).

While the meme can take on many variations depending on the poster's wishes the common thread among all these versions is simply stating a preference for one thing over another. 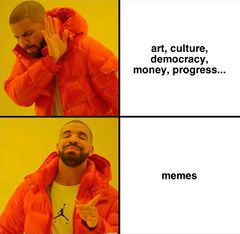 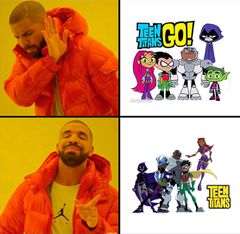 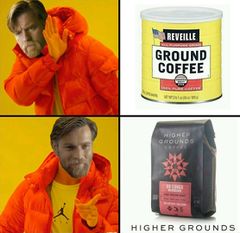 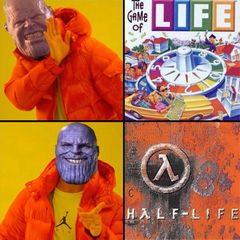