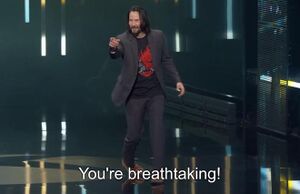 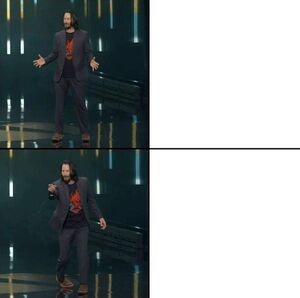 At the 2019 rendition of E3, an eccentric gamer in attendance interrupted Keanu Reeves' presentation of the role-playing game (RPG) Cyberpunk 2077, loudly claiming, “"You're breathtaking,"” which was directed at the actor-cum-presenter.

Just a few days ago, on Sunday, June 9, 2019, Keanu Reeves carried out a presentation of Cyberpunk 2077, a much-anticipated role-playing game that is under development by CD Project Red, at Microsoft's Xbox press conference at this year's E3 convention.

An attendee, Peter Sark, yelled out loud during the presentation, "You're breathtaking," which was directed at Keanu Reeves. Rather than simply accepting the compliment or ignoring it altogether, Reeves volleyed back to Peter Sark by hitting the gamer with his own compliment. Keanu then called other people who were present at the presentation "breathtaking."

Peter Sark shared a video of the volley between him and Keanu Reeves on Twitter, which ended up collecting over 5,000 retweets and nearly 20,000 likes in just a day's time.

The first highly-popular use of the macro came from u/GallowBoob on Reddit, whose post garnered nearly 50,000 upvotes in a day's time.

Thus far, most uses of this image macro have been made by fans of Keanu Reeves in support of the famous, well-liked actor.

Others have used it to show support for wholesome or genuinely positive ideas and events, including those that are not known widely and have only been identified in user submissions of the meme in the form of news headlines. 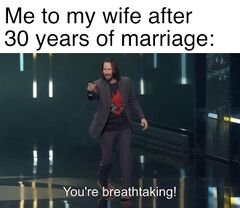 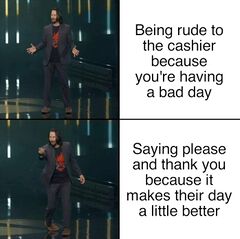 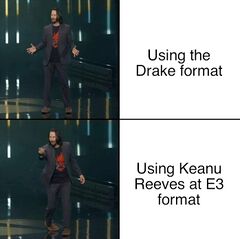