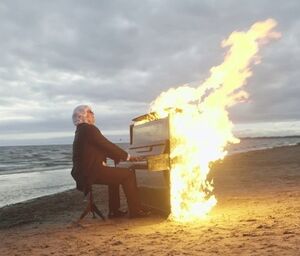 “Flaming piano” is an image macro which usually features two lines of text over an image of a man playing a flaming piano on a beach. His hair and garb are old-fashioned. It implies that he is playing such amazing music as to set the piano alight. It can also be used sarcastically to imply an artist or piece of music is objectively bad.

The meme is taken from a 2019 video of Danila Bolshakov performing the song “H in New England” by Max Richter. Richter is a German born composer who is known for scoring popular movies and television series such as White Boy Rick and The Leftovers.

It is not the first example of a flaming piano video to be uploaded to YouTube. Pianist James Nelson’s video shows him playing a condemned old piano for the final time as it is set ablaze. However, the inspiration for the Bolshakov video is believed to be the 2008 performance piece by Yosuke Yamashita in which the artist plays a burning piano beachside. Other than the artist’s flame retardant suit, the scene is very similar. Yamashita plays increasingly chaotic music until the piano becomes inoperable.

Flaming Piano emerged as a meme template in 2020. The first mover is unknown, but the spread began on Instagram. The meme was embraced by gamers who used it to comment on the intensity of a game’s soundtrack, or changes thereof following in-game events. It has been particularly popular with fans of Minecraft. It can be applied similarly to movies.

The meme is usually used to commend a composer who went above and beyond what was demanded of them. It is sometimes used to comment on a situation where the music changes and increases in intensity.

While the connotations are usually positive, there are some examples where the meme is used ironically to imply that a musician has taken a concept too far, or that they just plain suck. 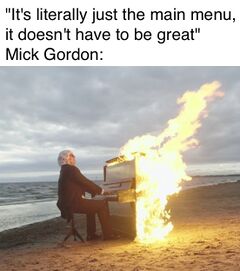 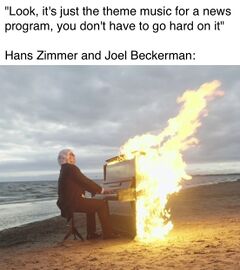 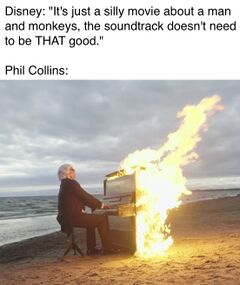 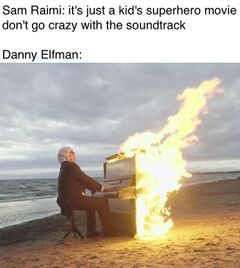