“This is Fine” is from the webcomic “Gunshow,” by K.C. Green, which came out in print in January 2013. The cartoon took off like wildfire as a popular meme focusing on the first two panes.

The first image of the six-pane piece shows an adorable dog enjoying a refreshment in a cafe where flames surround the cute hound as he happily sits in his chair. In the second pane, he gives himself a pep-talk saying, “This is fine”. In the third pane, he picks up his coffee cup and reassures himself that he is in control of the situation, despite the flames and the cartoon balloon above his head reads “I’m okay with the events that are unfolding currently”. The fourth pane has K.C. Green’s canine protagonist confidently slugging his drink. The fifth pane has the little dog looking a tad bit worried as the fire continues to leap up the cafe’s walls. The balloon reads “That’s okay, things are going to be okay”. The sixth pane shows him melting.

The imagery has become popular on Tumblr and Imgur, inspiring thousands of upvotes and numerous comments. Then, in a twist, on July 25th, 2016, the Republican National Committee took to Twitter and sent out K.C. Green’s original two-pane work, which they accentuated with a shrug emoticon under the hashtags #EnoughClias and #DemsInPhilly.

In response, “The Nib,” a political cartoon website, ran a new original artwork by K.C. Green that exchanged the sweet dog for a deranged-looking Republican mascot elephant wearing a boater hat, with the original wording “This is fine”.

On November 13th, 2016, after a suitable period of mourning after Donald Trump won the election, independent game developer Nick Kaman, inspired by K.C. Green’s work, made a game where the goal is for the little dog to put out the flames engulfing the room with a fire extinguisher that shoots pink hearts.

There are many ways to interpret K.C. Green’s work. We can see it as embodying the power of optimism; the delusion of limited perception; and the folly of fantasy. It illustrates blind acceptance or a state of denial in the face of a difficult situation. Whatever meaning a viewer brings to “This is Fine”, this is a fine piece of humorous illustration. 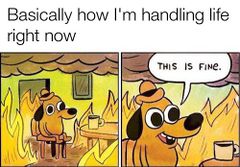 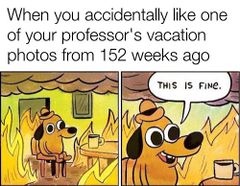 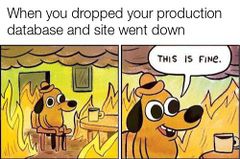 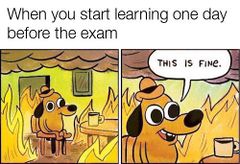