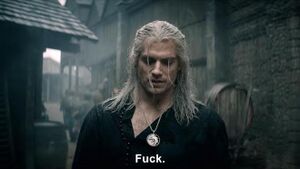 These memes are made up of still images of the character, Geralt of Rivia, from the Netflix original series 'The Witcher'. His frequent use of the phrases "fuck" and "Hmm" made him a fun and trending target to use for memes.

'The Witcher' premiered on Netflix on December 20, 2019. Geralt of Rivia, the leading character on the series, became quickly known for two common catchphrases. When caught up in a negative situation he usually says "Fuck". When contemplating or reacting to a thought-provoking statement he usually says "Hmm".

On the day the series released, Geralt of Rivia became a trending topic amongst the social media for his catchphrases. A Twitter user, @numenorstark, submitted a video clip of Gerald saying "Fuck" in one of the series episodes. Within a couple of weeks, the tweet gained close to 600 likes and was retweeted 160 times.

A couple of days later, Twitter user @witchernetflxtv submitted a similar post as a reaction image and generated close to 2,000 retweets and gained nearly 8,000 likes. This inspired PhoenixTheKid, an Imgur user, to submit 8 different GIFs of Geralt's "Fuck" reactions. Nearly 100,000 users viewed the post and it also gained close to 3,000 points. Reddit user, Saul_g0od, created a meme based off of the 8 GIFs. His submission gained more than 55,000 upvotes in less than a week. Due to its growing popularity, it quickly began to trend across social media platforms.

This meme is being used by the online community as a comical or dramatic reaction to situations, events, and comments. 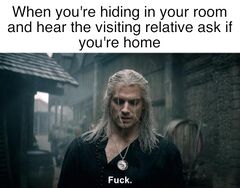 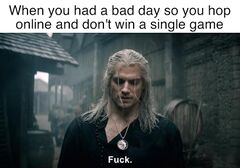 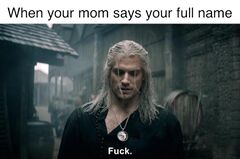 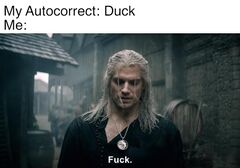