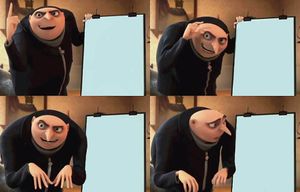 “Gru's Plan” is a series of images taken from the 2010 movie Despicable Me, featuring Gru, the villainous protagonist of the movie. Most versions of this meme include four images of Gru lecturing next to signboards on an easel, with the boards labeled with whatever the creator wants to add.

The first three panels show Gru speaking with a confidently evil expression. However, in the third panel the board is labeled with something surprising or mistaken, and the fourth panel shows Gru looking back at the same board with a dismayed look on his face.

In the movie scene the images are taken from, Gru is using a series of signboards to explain his plot to steal the moon to an evil banker he hopes will finance him. In the middle of his presentation, he discovers that his foster daughters have inserted a drawing of him sitting on the toilet among his signs, causing him to stop in confusion and alarm mid-lecture.

This scene was first turned into a four-panel sequence of images on Reddit in 2018. Animated GIF versions have also been created. There are also many versions that substitute another character (usually an anime, cartoon, or video game character) for Gru next to the signboard.

The humor of this meme comes from seeing Gru confused and deflated as he realizes the flaw in his plan. Spotting that a plan is going wrong just as it's too late to stop yourself is an experience we can all empathize with. And there's plenty of schadenfreude in watching someone else go through the same thing.

Since the signboards are blank, this meme can be filled in with any "brilliant plan" that the creator wants to mock, such as unpopular moves by video game or pop culture creators, political commentary, or social observations. 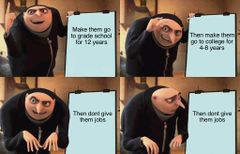 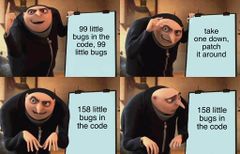 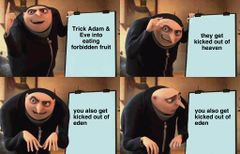 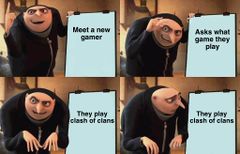