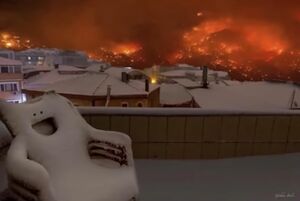 For several years, meme lovers and others have enjoyed using the “Happy Chair” image to express themselves on social media and other platforms. Happy Chair is a photo of contrasting light/positive and dark/negative elements that create a story.

The picture depicts a nighttime, winter town of cream-colored houses and buildings with white, snow-covered rooftops. In the foreground, the snow has fallen across a stack of lawn chairs on a balcony in a way that makes the top chair look like it's alive and happy with a wide-open smile. This light-hearted anthropomorphic depiction contrasts wildly with the photo's background that depicts a horrific massive wildfire of orange flames engulfing dark hills.

Happy Chair appeared on the internet on February 20, 2017 when the The DumpADay photo entertainment site uploaded the image with other memes. The original image featured "Some chairs just want to watch the world burn" text, which was a variation of an image about how some men want to do the same.

Since then, Happy Chair has continued to be used by people across the internet around the world with a wide variety of statements, including the "This is fine" text that originally appeared on an image of an anthropomorphic dog in a hat sitting at a table with a coffee mug surrounded by fire.

After SARS-CoV-2 virus and its variants caused global upheaval, a new version of Happy Chair emerged on reddit. On April 7, 2020, a reddit user known as "anotherformerlurker" posted the image to /r/Dankmemes with "The world literally ending" across the burning hills and "Reddit trying to find ways to make memes out of it" across the stack of chairs.

Happy Chair has different meanings depending on the text layered across the image and the positioning of the text. In general, the picture and text are about the perception of tragedy. They emphasize irony to make a statement about humanity and create humor.

When treated like the This Is Fine template, for example, Happy Chair is about how people try to reassure themselves that they're fine even when they're knowingly about to experience harm. 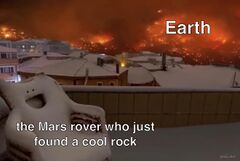 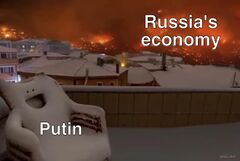 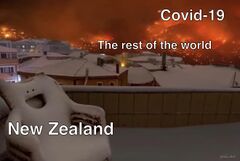 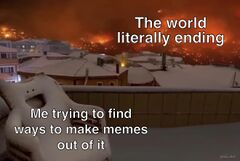