“I'm Still Worthy” is an image-based reaction meme that began in May 2019.

The meme consists of a still from the scene in Avengers: Endgame where Thor summons his hammer, Mjolnir, while in the past.

Mjolnir can only be summoned or carried by those who are deemed worthy, and Thor is pleased to find that he is still capable of wielding the hammer despite years of idleness and alcoholism born from grief.

The "I'm Still Worthy" reaction image dates back to at least May 14, 2019, when it appeared on Twitter and Reddit under various captions.

The meme is reminiscent of a viral image posted by Twitter user @galensdeathstar on May 5, 2019, which captioned a still of Thor from the same scene with “your depression does not make you any less worthy.”

But while that image was intended to be inspiring, the “I’m Still Worthy” reaction image can be used in much more lighthearted contexts.

The "I'm Still Worthy" image represents a triumphant reaction by a person who has been either welcomed back by something or someone they have not seen in a long time, or accepted despite their personal failures. 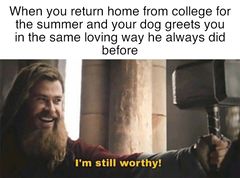 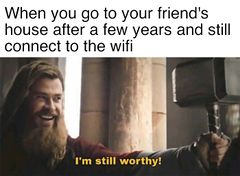 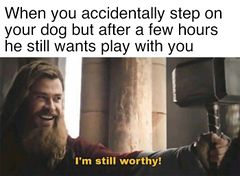 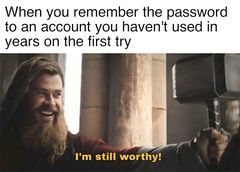