“Angry Hulk vs Civil Hulk” is the name of a meme based around contrasting two different images of the Marvel character Hulk. This format is typically used to contrast other things alongside the images.

This meme is used to convey a contrast between two different topics. Typically, one thing is more enraged and angry whereas the other thing is calm, composed, and more intellectual. This format can be used to reference anything from popular culture to various different real-life scenarios.

Most often, the two things being contrasted is the discussion around certain topics or on certain platforms. The format is then used to show that individuals are angry and out of control while discussing one topic, but are humorously calm and composed when discussing another topic. The latter topic is usually something more inappropriate than the former. 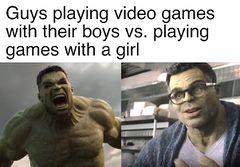 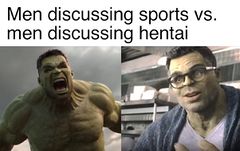