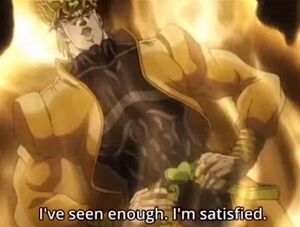 “I've Seen Enough. I'm Satisfied” is a quote that is recited by Dio Brando on JoJo's Bizarre Adventure. This is an anime television series that has been around since 2012 about the psychic adventures of the Joestar family. This meme is based on screenshots of Dio Brando stating his infamous line as a reaction type. The images are given in macro based styling. There is a basic template that is utilized, and many individuals do zoom in to make a more specific reference.

The specific scene in the image is from the episode "Dio's World, Part 3" which was aired on June 12, 2015. Dio Brando is in a battle in which he becomes surrounded by flames, then says his infamous line. An individual on Reddit just made the beginning of the meme last year, however on June 28, 2019.

The YouTube channel, A.I.Channel, responded to the Reddit post shortly after and has built since. The meme was slightly altered by another Reddit user on November 11, 2019 to further enhancing the spread of usage. January 22, 2020 introduced even further variations, and in March, it finally went viral.

The I've Seen Enough, I'm satisfied image has many meanings that can be contributed to it. One meaning that many utilize it for is when someone encounters something that is either exiting or overwhelming. Others utilize the image to capture the feeling when encountering something awkward, by referencing the quote in a sarcastic manner. 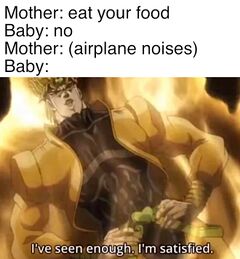 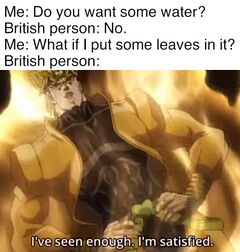 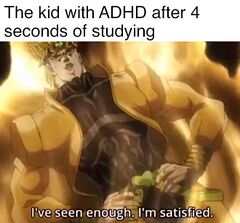 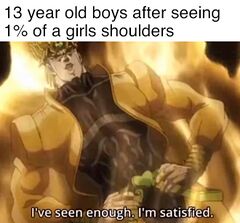