I Do One Push-up 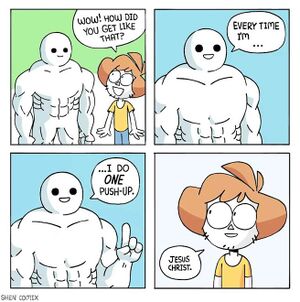 During the coronavirus pandemic of 2020, fitness enthusiasts have been sharing their routines on social media, and they have often focused on push-up exercises they can easily do at home.

In some cases, these routines are combined with internet culture and entertainment; for example, a few YouTube users have taken on the One-Punch Man fitness routine of 100 push-ups, 100 sit ups, 100 squats, and a 10 kilometer daily run as a quest to gain superhero powers of Japanese anime characters.

Other users talk about combining push-ups or pull-ups with repetitive habits, and this is how the “I Do One Push-up” meme originated.

This exploitable four-panel web comic was posted on Shen Comix in July 2020.

Many of the comics drawn by this artist seem to be ready-made for exploitable meme purposes. In essence, a man asks a muscular character how he was able to achieve such a physique, and the explanation was given was that he did a single push-up each time he had sex on his mind.

A couple of days later, the first exploitable was posted on Reddit to represent the United States and its proclivity for armed conflict overseas; this version of the Shen comic received even more positive reviews, and it was followed by a series of similar versions dealing with K-pop fans and the annoyances of entitled American women.

This is meme is a modern take on the "if I had a penny for every time [something happens], I would be a millionaire" cliche phrase. The correlation with the coronavirus home fitness craze is a nice touch. 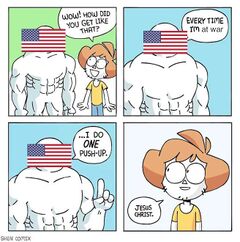 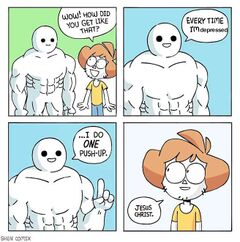 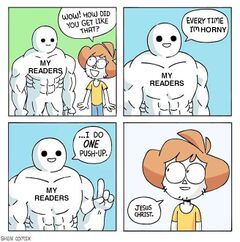 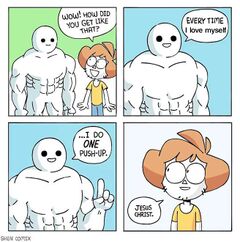