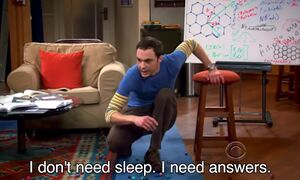 From 2007 to 2019, American television sitcom "The Big Bang Theory" racked up impressive ratings despite having an unusually quirky motif.

There are two important ingredients of this show's success: one is that it follows a very traditional sitcom formula of slapstick, physical comedy, hijinks, cliches, and even a live audience.

The other ingredient is related to internet appeal; "The Big Bang Theory" essentially matured along with online culture, which means that it easily lends itself to meme-making. "I Don't Need Sleep. I Need Answers" is one of hundreds of memes featuring scenes from the show.

This meme comes from the "The Einstein Approximation," the 14th episode in third season of the show.

We see Dr. Sheldon Cooper working on a problem involving electrons passing through graphene in a way that makes them seem as if they lack mass. He is so consumed by this problem that he is not able to sleep. When his friends scold him for his self-imposed insomnia, Dr. Cooper replies: "I don't need sleep. I need answers."

The first time this scene appeared as an image macro meme was around 2017, mostly on Twitter updates and Pinterest boards. Popularity of this meme increased in June 2019 thanks to more appearances on Reddit forums.

This is a pretty straightforward meme used to express the paradox of knowing you need to get some sleep, but there's something keeping you awake to an obsessive point. 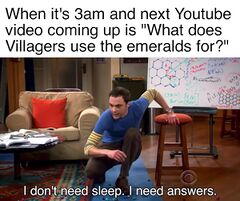 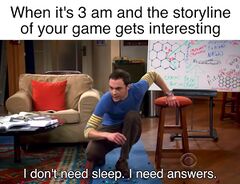 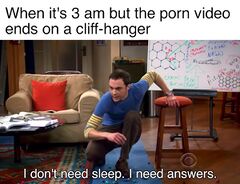 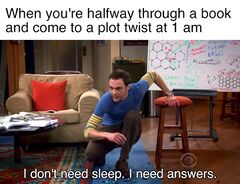