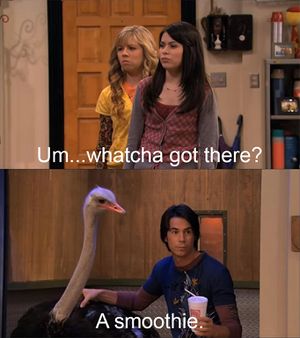 “Whatcha Got There?” is a meme comprised of two or three screenshots of an iCarly scene.

In the scene, Spencer enters the apartment with a smoothie in one hand and the leash of a newly acquired ostrich in the other. When Carly asks "....Whatcha got there?" to prompt an explanation for the ostrich, Spencer answers, as though nothing about his behavior were abnormal, "A smoothie."

Though the original episode "iMeet Fred" first aired in 2009, the scene didn't surface online until user "ghettohunter" uploaded three screenshots to the image and gif sharing site FunnyJunk, where those screenshots, while funny in their original form, laid dormant for years. It wasn't until Tumblr user goddessofidiocy posted a rendition labelling Spencer as Captain America and the ostrich as Bucky, poking fun at Captain America's attitude introducing Bucky into the Avengers' lives, that Whatcha Got There? surfaced as a meme format, cemented when Tumblr user quackson-klaxon used photoshopped images instead of text labels to cast Peter Parker as Spencer, MJ as Carly, and Ned as Sam, photoshopping the Spider-Man suit over the ostrich.

The punchline here is Peter's belief, in Spider-Man: Homecoming, that he's good at hiding his hero activities. Whatcha Got There? as a format took hold, and was introduced to Reddit by user PleaseDontTellMyNan in September 2018.

Whatcha Got There? functions as an object label meme, conveying meaning via political cartoon like labels. Other examples of the object label format include the Distracted Boyfriend, Powder That Makes You Say..., and most Wikihow Illustration relabelings. 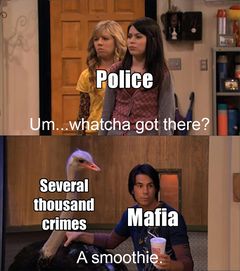 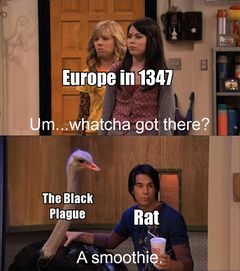 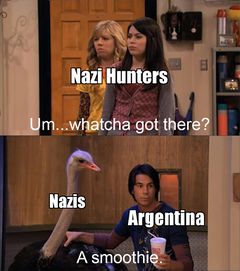 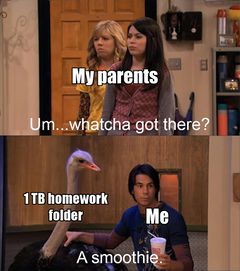