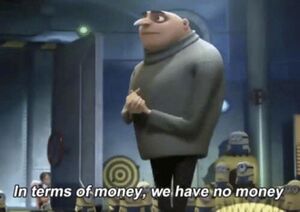 Shortly after the release of Illumination Entertainment's instant classic film Despicable Me, a wide range of memes took the Internet by storm, stealing the hearts of Facebook moms everywhere as they flooded all our timelines with Minions.

Several other jokes spawned from the movie as well, including this one that screengrabs a captioned scene with the villain Gru stating, “In Terms Of Money, We Have No Money”.

Like most memes, this quote is often taken out of context in order to create a humorous depiction of a relatable situation; in this particular case, Gru is being used as a parody of someone who is being stingy or overly-concerned with trivial costs.

Like most viral content that explodes on the Internet, this was first circulated on Reddit and Facebook, with young people using it as an opportunity to make lighthearted jabs at the well-earned stereotypes of their parents who scolded them as children for leaving the lights on too long, or complained about the cost of things getting higher.

The meme is not just used by snarky teenagers to clown on their parents, though; it is also commonly used as a vehicle in general to spoof people who are cheap by comparing them to a cartoon villain.

The fact that Gru is not exactly Lex Luther, either, adds another layer to the humor; he is clumsy, irresponsible, and boorish. When these qualities are conflated with the cheapness of someone you may know or remember – like that terrible ex you had who would always embarrass you by arguing with every service worker over every tiny cost – it has the makings of viral posts; funny, relatable, and overall wholesome. 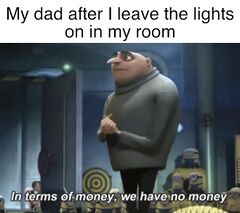 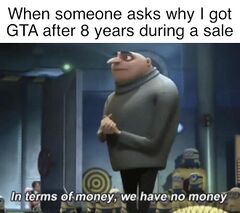 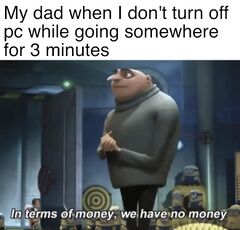 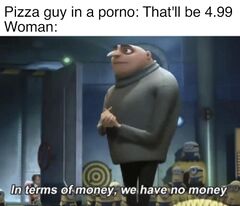