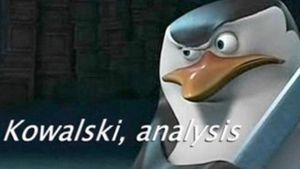 Kowalski is a cartoon penguin from the Madagascar movie and television franchise. He is referenced in several memes, including some that show Skipper, another penguin, demanding "Kowalski, analysis" or "Kowalski, status report."

Kowalski is one of a team of four penguins who originally appeared in Dreamworks' animated movie Madagascar in 2005. Led by Skipper, the penguins, including Rico, Kowalski, and Private, were characterized by military-style dialogue, intense seriousness, and unflappable competence. Kowalski served as Skipper's second-in-command and the "brains" of the team. Skipper's habit of turning to Kowalski for advice helped create this meme.

Although only supporting characters in Madagascar, the penguins became popular with viewers. They were successful enough to get a spin-off television series, The Penguins of Madagascar, in 2008 and their own feature film in 2014.

The "Kowalski, analysis" meme is usually posted in response to a suspicious or uncertain situation to express skepticism. The image shows Skipper raising his eyebrow with a dubious frown on his face.

"Kowalski, status report," on the other hand, shows Skipper gesturing imperiously, and is meant to express impatience, usually in an exaggerated fashion.

These and other Kowalski memes play on the fact that the humorless Skipper is the straight man of the group, who tends to react to even small problems as if they're life-or-death struggles.

Some posters also build on Kowalski's role as the team's resident genius and authority on everything, using images of Kowalski pointing to a clipboard, notepad, or whiteboard to emphasize a certain message. These are often combined with "Kowalski, analysis" to create two-part memes.

The Kowalski memes have become popular and common enough to attract parodies and a backlash, with many posters declaring that the meme is already dead from overuse. 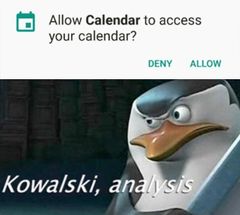 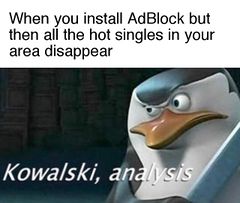 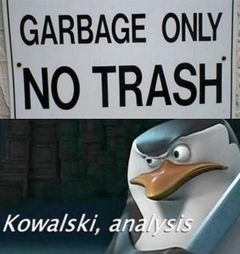 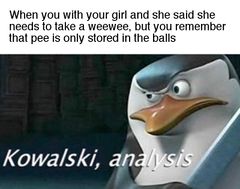