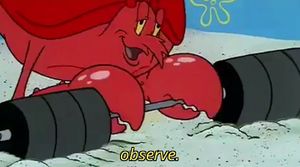 The meme is used with a screenshot of the character at the time of the quote and is mainly used to show a person or group comedically doing something said not possible or undesirable.

This quote was first uttered on Spongebob Squarepants in the episode "Ripped Pants" on July 17th, 1999.

Larry the Lobster (Doug Lawrence) decides to show off how much weight he can lift, and confidently utter "Observe" promptly before doing so.

This quote is known to have begun the journey to being a well-known meme on May 9, 2019. On that date, it was first used by a Redditor and quickly spread like wildfire across the internet, taking many variations.

The meaning behind this particular online sensation is actually very cut and dry. It is mainly used as a way to make fun of a person or group doing something others would view as unaccomplishable or at the very least, undesirable. Often as set up for the joke is used such as:

— Teacher: You can't do this paper in one night.
— Me: Observe


Now, much of the humor is lost without the image. 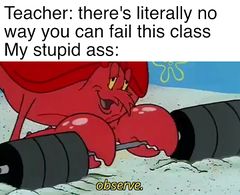 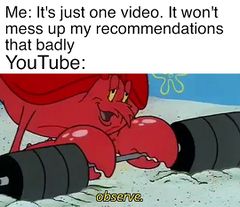 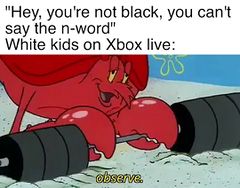