Men With a Time Machine 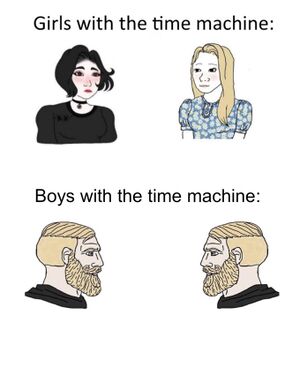 “Men With a Time Machine” is a 2-panel meme featuring two interactions, the first illustrating what a woman would do with a time machine and the second illustrating what a man would do. The top panel usually depicts a doomer girl wojak visiting her grandmother who is represented as the tradwife wojak. The top panel does not usually deviate from this: 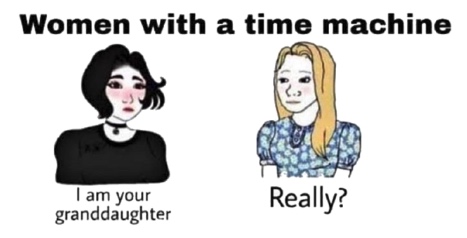 The bottom panel shows a man, usually shown as a Nordic gamer wojak, doing various deeds that would have an impact on history. Many of the implied outcomes are hyperbole and ironic and some even extend into fictional timelines.

Since it derives from wojak comics, the template has seen its own spinoffs. The base conversation between the girls and boys are applied to other scenarios besides time traveling. This meme has contributed to the sustained popularity of all the wojaks which originally appeared in it.

It is similar in appearance and usage to “Do men even have feelings?” and emerged at around the same time.

This meme template owes its creation to an earlier one, Running Arnold Schwarzenegger. On July 2, 2020, Reddit user Korina-chan posted a caption on a Running Arnold in which he is attempting to save Harambe. It sparked numerous spinoffs which became known as “Time Travel: Is Invented” which contrast the behavior of boys and girls with a time machine. 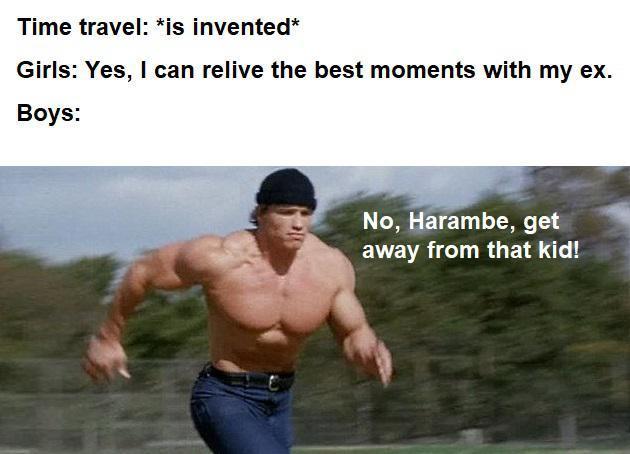 This references a series of memes claiming that our timeline would have been significantly different and perhaps better if the Harambe incident had never occurred. In the memetic records, there is evidence to support this claim. After all, this is one of the many meme formats that ended up emerging downstream from Harambe. 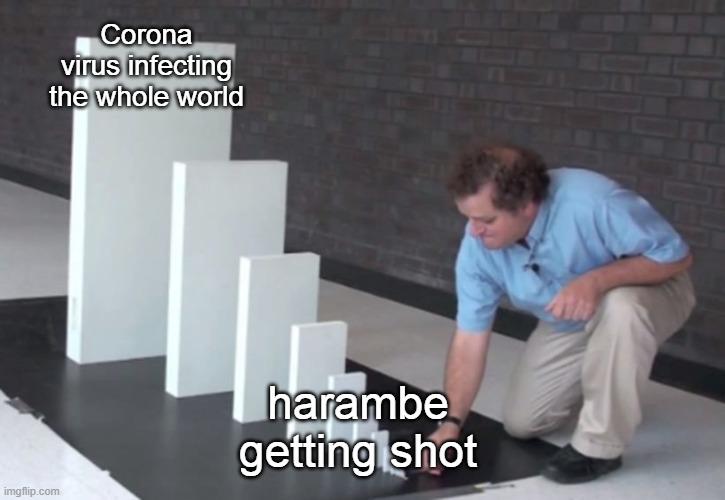 After its initial posting, the meme gained immediate popularity on major social media platforms. Throughout July several other users, mainly on Reddit, began using the same caption over Running Arnold doing other acts of historic heroism.

The first (known) popular use of this template in its current form is believed to be the work of Redditor Soviet_yakut, whose post also became immediately popular and spurred more creativity from other internet users. 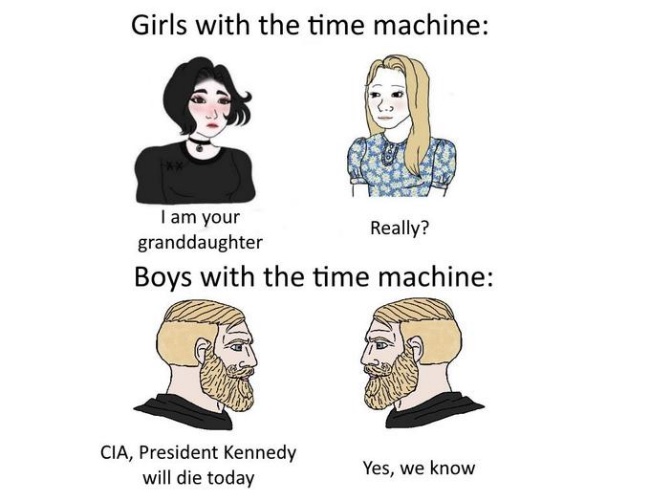 Later in August, the new format had started getting reposts on Reddit and other users started to give their own takes on it. The meme continued to gain popularity on other social media sites like Twitter and it’s counterpart Minds, as well as Instagram, Facebook, and even Snapchat. It’s spread was particularly fast in history meme groups on all of these platforms.

In the coming months, some users began to give some more agency and depth to the girls. Others gave the males comical and more trivial time travel goals. Various spinoffs appeared featuring animals and fictional characters with time machines. Detaching from the Running Arnold image and becoming a wojak comic allowed meme creators to broaden the applicability of the meme, but this also led to it eventually slowing down.

More recent derivatives of this template have begun to depart from the time machine concept altogether, though some retain the boys vs girls elements. It seems that Men With a Time Machine has left a lasting impact on wojak comics as a whole, despite the fact that it has seen a decrease in popularity through 2022.

Men With a Time Machine is a boys vs girls template. This meme plays on the idea that women are more concerned with domestic or mundane things while men are concerned with changing the course of history. It can be used to express a desire for what could have been with varying levels of irony. It is often used to mourn a late celebrity, or to advise a historical figure. It can also be used to highlight some of the ways men and women think differently. More recently, the template has been used to create mock conversations to illustrate the difference in perspective between two groups, or a change in perspective over time.

Time travel has long been a subject in science fiction, and internet chatter. Everyone has some sort of time travel fantasy. A common internetism is that time travel can be debunked by the idea that nobody has gone back in time to assassinate Hitler. The more sophisticated term for this critique is the grandfather paradox, which posits that it would be impossible for a person to go back in time and kill their grandfather before the conception of the father. Doing so would alter the course of events in a way in which they are never born and therefore would never be able to time travel. Despite the problems with the concept of time travel, it remains in our consciousness. Perhaps this is because it appeals to so many fantasies about timelines that could have been. 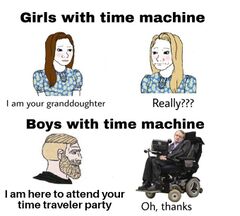 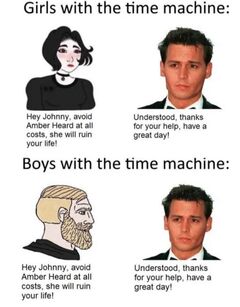 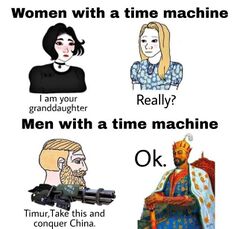